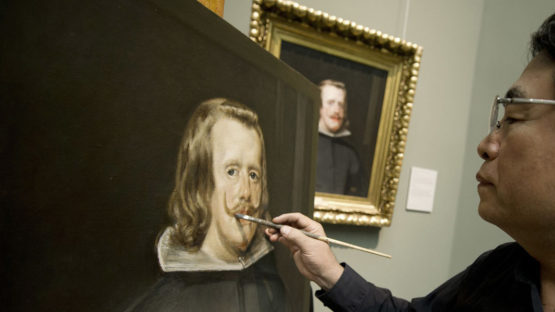 Yang Feiyun  is an acclaimed figure painter born in Baoton, Inner Mongolia.  Yang is a master of Chinese Realism, and his wife is a popular subject of his paintings. He paints primarily in oil with Leonardo da Vinci, Albrecht Dürer (and the European classical style being the most profound influences on his work. Yang’s paintings are precisely painted with excellent compositional harmony, and photorealistic sharpness.

Though Yang Feiyun’s wife is not his only subject she is his most constant one. This portrait of her with a dog began when he made a trip with his art students to study and paint minorities and their specific costumes. He borrowed the dress his wife is wearing in this portrait from a woman he met. At the time of the sitting, they had a dog in their home and while he was painting her portrait she picked up the dog and Yang saw the scene develop.

He has won multiple national awards for his art, and been exhibited at such institutions as the China National Museum of Art and the Jiangnan Museum of Art, Wuxi.  Yang currently is a member of the Chinese Artist’s Association, professor in the Oil Painting Department of the Central Academy of Fine Arts, and tutor of Doctoral candidates in the Chinese Art Research Institute. Yang Feiyun resides in Beijing with his wife, who is also a painter.