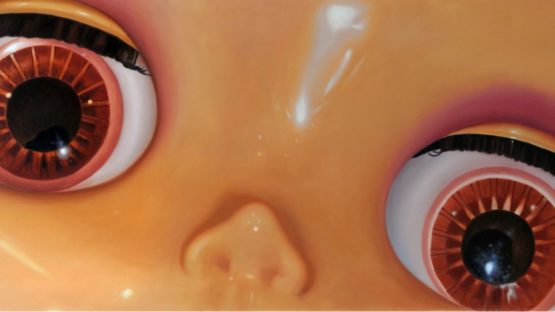 Yoshihiro Fujita’s artworks are as straightforward as it gets – the Japanese artist’s oil paintings represent close-ups of the eyes inspired by Manga comics. Even though Fujita has studied the structure of natural eyes, he’s not looking to create images of realistic human eyes. His inspiration comes mainly from the world of Japanese comics and cartoons, which have become a worldwide trend in the last decade, thanks to various computer games as well as the eminent animators such as Hayao Miyazaki. Fujita is looking to contribute to the spreading of Japanese aesthetics beyond the borders of his home country.

Fujita was born in 1971 in the city of Kagoshima, which belongs to the southern Japan. Surprisingly, he graduated in economics, but his interest in art was quite overpowering. In 1999, he switched from having visual arts solely as a hobby to studying computer graphics. Later on, guided by his own talent,  he continued to explore not only digital arts but also traditional drawing and painting. While he was practicing drawing, his interest became focused on the study of natural eyes. It is challenging to paint eyes due to their complex structure, transparency and very specific light reflecting characteristics, but Fujita wanted to master this skill. His in-depth knowledge of computer graphics and already acquired artistic precision helped Fujita reach his goal.

While Fujita was practicing drawing, his interest became focused on the study of natural eyes

The Language of Eyes

The role of eyes in Japanese comics and cartoons is as important as the regular body language. Eyes are some of the most potent indicators of various moods and intentions, both in real life and in cartoons. Given that us humans cannot control the size of our pupils, it takes just a little bit of eye language study to successfully decode a person’s state of mind just by looking into their eyes. Fujita’s paintings are depicting the most diverse states of mind, even though they are not representing the real human eyes. It is amusing to note different moods of his characters, such as fear, excitement, self-confidence or shyness, especially because his paintings are focused on eyes only. In the majority of Fujita’s artworks, we can’t even see the entire face of his characters – there is just a narrow strip of skin containing the eyes. Even through the topic of his art seems very simple, Fujita is very detailed in his work – the eyes of his characters come in most diverse colors and shapes and his painting skills are exceptional. Fujita’s pieces look almost photographic in their amazing precision.

It is amusing to note different moods of Fujita’s characters, such as fear, excitement, self-confidence or shyness

Manga comics have influenced not only the new generation of artists in Japan but also the entire lifestyle and aesthetics of the urban culture in Japan. This playful, bizarre and weirdly alluring style has already received a great success throughout Asia, Europe, and the United States. Fujita’s art clearly belongs to Manga aesthetics but at the same time it offers some new insights into the well-known topics since the focus of his work is extremely specific. The artist has thoroughly explored characteristics and meaning of the eyes in Japanese comics through his playful work based on the formal study of human eyes.