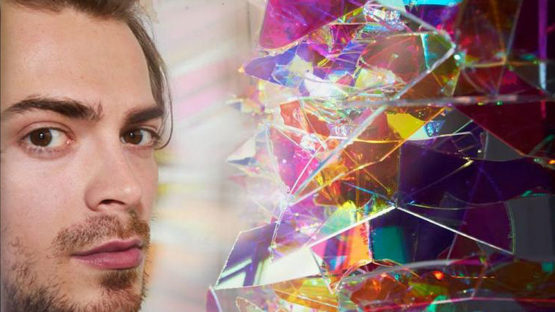 Artist Zane Lewis, an elusive and evolving talent, has reemerged within the New York art scene with a fresh and new aesthetic. Though Zane Lewis’s practice has changed drastically over the course of his career, he considers himself foremost a conceptual painter.

He first became known for his “Drip Paintings” (2005-2010), featuring found or pop cultural images and multi-colored cascades of paint. For these works, Lewis developed a technique that allowed the different paint colors to combine without mixing, and to retain a wet look. Since 2009, he has been working on “Shatter Paintings,” in which shards of glass appear to be embedded into a painting’s surface. Lewis describes this series as a turning point, when he became “more interested in apparitions than specific imagery,” and making “painting that never looks the same way twice.” What is most intriguing about these mirrored Shatter Paintings, though, is that they simultaneously engender fragility and danger. These themes reflect a familiar concept of preciousness and dangerousness that we constantly encounter in human life, bringing an organic sensibility into a highly fabricated artwork Other works include a series of hand-made holographic paintings.

He made the first “drip” painting in late 2005. Before that he had been making sculptures and installations which incorporated colored liquids and mechanisms that dripped ink. His desire was to take that way of working and implement it into a painting. Intrigued by the idea of a kinetic painting, he was struggling with wanting to use paint instead of the colored liquids he was accustomed to.Result is the following – He developed a technique that cascaded many colors of paint at once without the paint mixing together into a single color or becoming murky.

Lewis often alludes to religious notions and iconography, as said in his own words – „That’s pretty much where the drip element came into play. The paint drip sometimes was to emphasize visual stigmata, christening the image and yielding it religious nobility, while simultaneously discussing worship of false idols.“