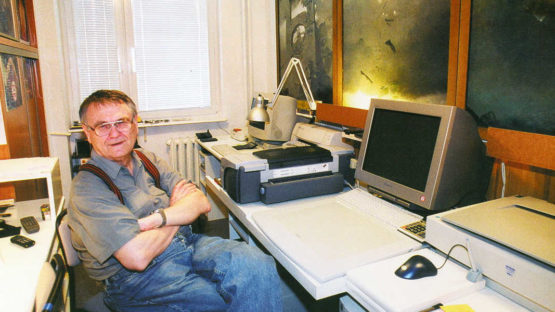 Although they may seem horrid and disturbing, the works of Zdzisław Beksiński represent the sum of various references, influences and are the signifiers of the artist’s worldview respectively philosophical persuasions. The artist did not use macabre, grim and surreal motifs just to pretentiously depict nightmarish visions, rather his compositions are an effect of the thorough and highly demanding journey into the unconscious. The outcome of this devotion somehow ended in tragedy, so it seems that those darkened thoughts came to life. Despite the possible superstition, it can be said with certainty that the astounding body of work reflects Beksinski’s immense efforts to obtain peculiar approach and carefully keep the sanctity of his dystopian mission regardless from the public eye.

From Autodidact to Authentic Professional

Zdzisław Beksiński was born in 1929, in Sanok, southern Poland. In 1955 he finished architecture at Krakow university and soon after the completion and returned to his hometown where he started working as a construction site supervisor often designing the bodies of busses and minibusses. Although Beksiński had no formal training as an artist, slowly he became intrigued with montage photography, sculpting, and painting. During the 60’ the artist became influenced by Surrealism and that period was marked as a fantastic period, which basically lasted till the mid-80’s. Afterward, the artist changed his style slightly due to an increment of the popularity of his work Thanks to endeavors of Parisian art dealer Piotr Dmochowski, the artist’s canvases were shown in France, US, and Japan.

Development of The Style

When started to creating artworks, Zdzisław Beksiński used his construction site materials for the production of sculptures usually plaster, metal, and wire, while with photography he appropriated various strange motifs so the works done through that medium were the foreground for the future paintings. Actually, the artist’s early paintings depicted anxiety embodied by the faces erased or obscured by bandages wrapped around the portrait and the practice was using oil paint on hardboard panels which he personally prepared. Beksinski develops the personal style which was apparently affiliated with abstraction, while reminiscent of Romanticism, Gothic and Renaissance painting.

Inhabitants of the world after tomorow

The Apocalyptic Aesthetics of Zdzisław Beksiński

The fascination with constant taboo themes such as death, decay, and darkness, brought Zdzisław Beksiński on the task of examining the human psyche. On the same trail, the artist tackled eroticism, abstractionism, and Eastern mysticism, yet remaining consistent in regards to always taking the precise skill on a higher level. The presence of discarded figures was determined by the wasteland or simply hellish landscapes, so the overall atmosphere suggests suffering, unease, or body or mental disruptions that were caused by the violent act.

The Other Side of Realism

In 1964 Zdzisław Beksiński showed his works in a solo exhibition in Warsaw, which was a complete success and somehow gained him, although not officially, the title of the leading figure in then contemporary Polish art, which is quite important in regards to Poland being a communist country at the time. The so called fantastic period phase marked the peak of his production and compositions were suffocated to the core with horror and repugnance. Although not eager to speak or interpret or even title his work, the artist claimed that he wishes to paint in such a manner as if he was photographing dreams.

Changing Through The Decades

Around the 70’s Zdzisław Beksiński slightly changed his approach and began painting in oils on masonite. The skillful manipulation with the light effect soon became one of his main features so his paintings are full of contrasts and masterfully rendered. By accentuating the suspense and mystery in general, his art production in this period can be perhaps related to some works by famous painter William Turner. The layers of color are constantly blending and pervade similar like the rhythms of a musical composition. Actually, he focused more and more on monumental or sculpture-like images rendered in a restricted color palette, including a series of crosses and in general paintings has grown less representational and become almost abstract in nature. With the 90’s technological progress, Beksiński discovered computers, the Internet, digital photography and photo manipulation, a medium that he focused on until his death. With those, the artist continued the lineage of fantastic realism, yet he never allowed the technology to get in the way of what he is attempting to convey creatively.

The private life of Zdzisław Beksiński was rather conventional and calm. Together with his wife Zofia and their son Tomasz he lived in Warsaw, where the three of them had moved in 1977. The artist was devoted to his work while in leisure enjoyed music and movies and was not much of the traveler nor the socialite. Yet, in 1998 his wife has succumbed to cancer and a year later his son, esteemed translator and popular music journalist, committed suicide. That has certainly destroyed the artist, but he found a possible comfort in work. Then, in 2005 Zdzisław Beksiński was stabbed to death at his Warsaw apartment a 19-year-old acquaintance reportedly because he refused to lend the teenager any money and threatened him further.

The means to an end

The artistic practice of Beksinski was often misunderstood so the artist insisted that his works were actually optimistic and humorous which goes in hand other remembrance of him being a pleasant person with the keen sense of humor. Interestingly, in 1977 before moving to Warsaw, Zdzisław Beksiński burned a selection of his works in his own backyard, without leaving any documentation on them and claimed that some they were too personal while others were unsatisfactory. The artist claimed not to be much influenced by literature, cinema or the work of other artists and almost never visited museums or exhibitions. Nevertheless, Zdzisław Beksiński’s art is exhibited in the National Museums Warsaw, Sanok, Krakow, Poznan, and the Goteborg Art Museum in Sweden. Without the doubt, the choice of themes and motifs qualified him as a unique and rare art specimen, but it is the almost sacred dedication and persistence which maintained the continuity of work what makes his art so unusual and special.