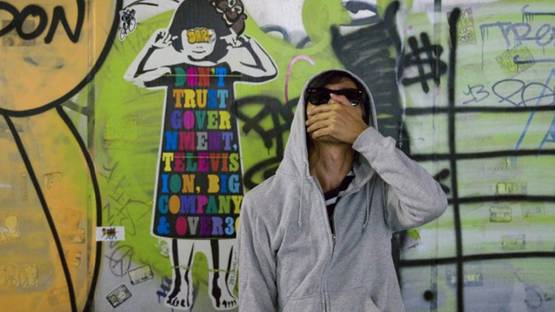 Kenta Masuyama aka 281 Anti Nuke is a Japanese street artist whose focus is to create intelligent, graphic street art intended to educate people in Japan on issues regarding politics, law, nuclear and other sobering matters. Tagged as the “Japanese Banksy,” he is an unlikely manifestation of Japan’s shredded identity: a contemporary artist of dissent in a country that rarely tolerates protest and barely supports modern art.

Masuyama splits his time between Tokyo, London and New York City; and he has been featured and interviewed in hundreds of publications and networks around the world including: Reuters, The Wall Street Journal, The New Yorker, The Economist, Financial Times, Giant Robot, Channel 24 and The Diplomat to name a few.

281 Anti Nuke, captures the voices of Japan’s chaos through art. He has covered Tokyo streets in images depicting politicians as vampires and children being shielded from radioactive rain to highlight the consequences of a meltdown at the Fukushima nuclear plant after an earthquake and tsunami on March 11, 2011. It was the date when 281's art was born and he has become a cult phenomenon among Tokyo locals.

The works of 281 carry a message of deep meaning, yet presented in a simple way, saying so much from showing so little. 281’s most notable work is his series of images of a little girl. In one poster she’s wearing a raincoat with the inscription, “I hate [radiation symbol] rain.” In another, she’s reaching for the word “Future”; Underneath her feet reads, “is not only for politicians, officials, financiers, the rich and Tepco.”

With his face hidden behind sunglasses and a white surgical mask, the artist is almost as invisible as the radioactive contamination he is protesting against - yet his stickers are graphic reminders of the Fukushima nuclear disaster. The most politically sensitive stickers have the shortest half-life, usually lasting less than the average of three days it takes before his work is torn down.

"I hope by leaving my art I can remind people that we're not safe at all ... and that they will do something to protect themselves."

281 Anti Nuke is a rare instance in a country where graffiti writers face heavy penalties and strong social disapproval. Online commentators have called for his arrest and his agent says the artist has received death threats. But he is determined to keep drawing attention to what he calls "an enormous public contamination disaster".

"I want to make images that express doubts about what's going on in politics - like a label that says 'This is happening, pay attention'."