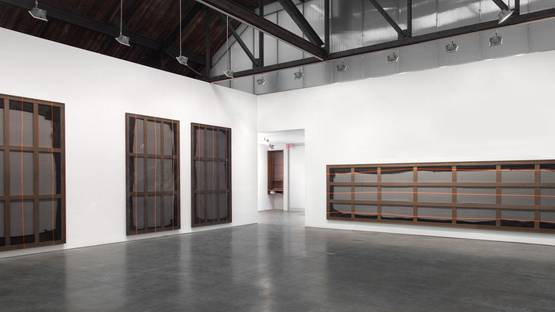 Making something big out of something small is a trait of great people. Overcoming the limitations of a chosen medium and being able to fully express yourself is a clear sigg of a great artist. Aaron Bobrow is an American artist best known for his painting style. He’s been using tarps since around 2007 and has been long interested in the best way of incorporating them into his practice of painting, which comes from abstraction. Always painting on top of them, he’s been trying to create the simplest way to captivate the viewers and to have the most honest dialog with an image that he could find, because all the images he depicts come from reality.

Born and raised in San Francisco, Bobrow drew all the time as a child but had never considered drawing as a field of art at that time. He went on to study design at the Parsons School of Design, New York. Unhappy with the choice of field, in junior year he dropped the design studies and focused on art, graduating in 2007. During studied, he worked part-time for Dan Colen, expanding that to a full-time job after graduation. Over time, his own personal work was gaining momentum, as the artist explored how will industrial or consumer products behave once applied to onto a painting surface. Fascinated with to changing of the artwork’s color, he became increasingly interested in the idea of removing his hand from the process of painting, leading to his use of tarps. From the start of his career, Bobrow was interested in creating pieces which would enable the viewers to have an experience with them and develop a sincere and honest dialogue. Using tarps brought some changes to his practice. The ways of acquiring them were different – the artist would buy them, barter, or even steal, exchanging the time in the studio for the time that he now spent on the streets, trying to collect used tarps from around New York. The pieces looked as monochromes to the viewers, each a bit different in color and appearance. By stretching the tarp, Bobrow overcame the problem of not being able to paint on them, he mediated the intended utilitarian function, creating new objects that were situated through the lens of a painting. In the eyes of the observers, they are paintings.

Like some great artists, Bobrow also overcame the limitations of his chosen mediums

Bobrow’s painting style can be analyzed on the example of an artwork titled Big Green (2011). It’s made of green tarp stretched over bars normally used to support paintings on canvas. The stretcher bars are visible, with several parallel seams running across the object at approximately 20 degrees angle. A seam that is probably the most notable is located in the lower right corner and is accompanied by hundreds of lines produced by the wave of the plastic tarp, and the only breaks in this array of striations are tension wrinkles coming from the seams and the edges of the support. The familiarity of the green color is disrupted by its translucency over the stretcher bars. Mundane by design, these tarps are industrial and ubiquitous, usually associated with construction sites and open-air markets. Over time, the original aesthetic intention with which these tarps were created is gone, but now the single aesthetic trait this tarp carries is that it is a nominally pleasing crayon green. The piece itself is a perfect example of how narrow parameters Bobrow works within and yet manages to create powerful artworks. Inspiration came from Jackson Pollock’s famous No. 1, where the artist stretched a canvas drop cloth over the support after having painted it on the floor. Bobrow’s paintings in the series (that Big Green is a part of) reference this act of selection and completion with a simultaneously blunt and delicate hand. Without any mystical trimmings or ironic excuses, with its strength rooted in its observable clarity, the Big Green undoubtedly has a complicated aesthetic personality.

For some of the pieces, a lot of labor went into their creation. Not just in the final process of making, but also a significant amount of time was invested in finding the specific tarps the pieces are comprised of. The artist thinks of the tarp as a skin, an urban shedding. Watching buildings as they change over time, from foundations to the roof, Bobrow seeks the byproducts of construction and uses them in his work. It was this kind of observations that lead to the Electric Bathing, a solo exhibition held at Andrea Rosen Gallery in 2013. Instead of tarps, pieces were made with debris mesh, and not composed or cropped like the tarps. Further interested in finding out what happens what happens, he withdrew even more from the decision-making process and discovered that the work became more sculptural. The patina was gone and the very last notion of the painterly was eliminated with the transparency of the mesh, exposing the stretcher. Emphasizing materiality, the artistic took a more sculptural direction, where the support was no longer just a backbone of the piece, now exposed at the front, taking a lead role. Electric Bathing was Bobrow’s first solo show in New York. In fact, all the small changes in his practice can be seen in the exhibitions.

The exhibitions show all the small changes in his practice

In November 2015, the artist presented his new body of work consisting of drawing, sculpture, and painting. The exhibition Heavy Metals was held at Halsey McKay Gallery, and it showed a continuation of the artist's practice of working within the vernacular of architectural debris and the aesthetics of late modernism, with vestibule partitions being coated with ink and enamel. Bobrow’s style has further evolved, and it’s visible in the pieces. Layers of grids drawn on transparency now occupy an acrylic box, and the base of a steel table has been cut into pieces before being re-welded together. A display light set on the floor casts silhouettes as viewers circulate the room. Staged and memorialized, this work brings into focus the fetish of industry and patina of use.

Aaron Bobrow sees everything in his work as content, from stretchers, sculptures, to photographs. Throughout his career, he’s been trying to find the most suitable way of closing the gap between the delivery system and content, so the constant evolution of his style and practice makes sense. As his art passes through different manifestations, so does his search for continuing to capture the viewer’s attention and keep that sincere dialogue with the images that are still coming from reality.