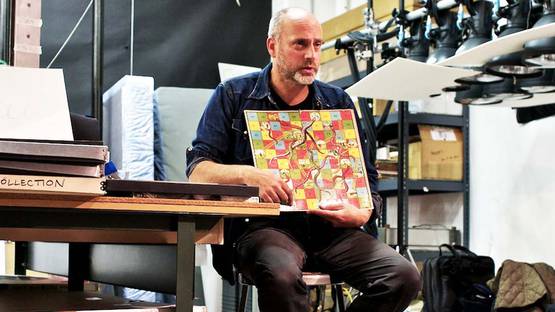 British-born photographer Adam Fuss is known for his enigmatic photographs, which he creates using photogram techniques.

Fuss was born in England and—following the death of his father from a stroke in 1968—moved with his mother to Australia. Fuss later relocated to Alaska as a young adult, working as a photographic apprentice at an advertising agency for two years before moving to New York. He worked several different jobs in the city while experimenting with a pinhole camera, and exhibited these images in galleries in 1985. He then began working with photograms, placing objects on top of photosensitive material and circumventing use of the camera with a technique made famous by Surrealist artists. Fuss received great critical attention for these works, which were acquired for major museum collections.

He features evocative imagery in his works—ranging from flowers and natural motifs to images of babies, children’s clothing, abstracted spirals, and drops of water—and his photographs are often suffused with light and an ethereal character.

His work has been included in exhibitions at the Museum of Fine Arts in Boston, The Metropolitan Museum of Art in New York, the FotoMuseum in Winterthur, Switzerland, and the National Gallery of Victoria in Melbourne, Australia. In 2000, Fuss was awarded the 16th Annual Award for Art from the International Center of Photography.