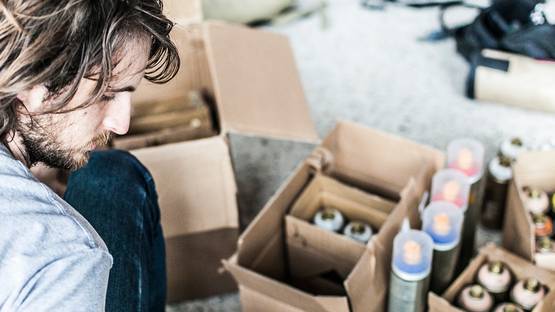 Adnate is an Australian portrait painter who is using spray can and acrylic to create the faces of women and aborigine that are pushed up on 5 meter high walls and can be seen in New York, Berlin, Toulouse, and more.

He was born in Melbourne, one of the most incredible street art capitals of the world. Adnate picked up a spray can when he was a teenager.  He has contributed to the street art scene through graffiti murals. Heavily influenced by the chiaroscuro of renaissance painters like Caravaggio, Adnate embraces portraiture like the masters of the XXI Century. Elevating graffiti art above the level of letter writing, Adnate’s subject matter and their subsequent status often belies the intent of his portraits. Adnate uses an arresting style to create these intimate portraits. He has transcended his origins as a graffiti artist to develop a complex practice that rivals the establishment of contemporary portraiture. In 2010, Adnate's first solo exhibition was organized, explored elements of the beauty and the urban decay which was a success. A second exhibition in Berlin has pushed him further in Europe. Now, he focuses his works by clashing graffiti and fine art and continues to paint walls through the world.

The gaze of modern society, cropped with color from the street/ renaissance, he examines the idea of who we are looking at. In particular, those who we are obsessed by and how fragile the origin of that obsession is. His works are often cropped by evocative slices of vibrant color, channeling a presence of character, much like a still life uses it’s background as a setting for detail and showing of fine brushstrokes. Adnate’s realism is highlighted by the use of what appears careless, but is frequently calculated blocks of vibrant color.

Distressed by the place of aborigines in the Australian society, Adnate offers to give them back the place they deserve by his painting. “People have told stories by making marks on walls for thousands of years. It lets people know they are alive and in turn has helped ancient cultures survive. If graffiti/street art didn’t happen, we would never know these people even exist.”

Adnate’s work depends on a fusion of close studies of his subjects with skills learned on the street. His large scale works are created with the highly controlled application of aerosol and acrylic paints. He cuts across the solemn intensity of his subject’s gaze with bright blocks and splashes of color that bring his works to life. He is also a member of the famous AWOL crew.

He lives in Melbourne.