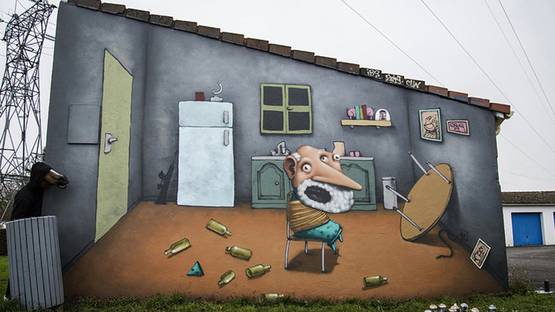 Ador is a young French graffiti artist, born in Nantes. He studied arts and grew up in the northwest of France. As a teenager, he started tagging and drawing, together with other graffiti writers.
In 2005, he painted a mural in the neighborhood where he lived. Ten years later he is painting his art throughout the world, from Montreal to Shanghai.

His works represent his own universe, full of imaginary humanoid characters, usually with large mouths and long noses. The goal of his artwork is to tell stories and ask questions. The other graffiti artists, comic books, current events and his surrounding are his source of inspiration.
He collaborated with Semor, with whom he visited Chicago, Los Angeles and San Francisco. During their visit to the United States, they painted murals and exhibited their work at pop-up shows, hosted by Vertical Gallery and Rocha Art Gallery.

Apart from the numerous international wall festivals in which he participated, such as Meeting of Styles in Shenzen, China; Street Art Festival in Bratislava, Slovakia; Over the Wall in Nantes, France; Can You Rock in Montreal, Canada; Graffeurs au château in Tours, France; and HipHop Session in Nantes, France; he has also exhibited his work indoors.

The venues where you could see his works include Next Door Gallery in Geneva, Switzerland; Centre Intermondes et Faculté de La Rochelle in La Rochelle, France; Black Line Tattoo in Mallorca – Spain; and Street Control in Nantes, France.

Ador is represented by Vertical Gallery in Chicago, Illinois.