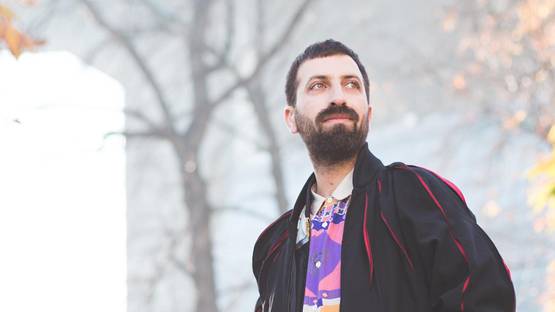 Ahmet Ogut, a conceptual artist from Turkey, works in a wide range of media including photography, video, and installation, in order to address topics such as cultural identities and political ideologies. His work is the perfect example of contemporary socially engaged art – Ogut often uses humor and loose narrative structures to offer his commentary on rather serious or pressing social and political issues. Ogut is regularly collaborating with people from outside of the art world so that he can produce more impactful pieces, able to create slight shifts in the perception of common, worldwide issues.

Public Spaces as the Artist’s Stage

The Castle of Vooruit

This installation made in 2012 and located in the city of Ghent in Belgium, is inspired by Vooruit, a historical complex which was originally the art and entertainment center of the labor movement in Ghent until the early 70s. Ogut’s installation is making reference to Le Chateau des Pyrénées’ of the Belgian surrealist painter Rene Magritte. The artist has launched a huge helium balloon in the shape of Magritte’s levitating rock near the Vooruit Arts Centre. In place of a puzzling castle sitting on the floating rock in Magritte’s painting, Ogut put a small replica of the Vooruit building. The goal of this beautiful yet bizarre installation is to capture the utopian ideas in a dreamlike scene which turned real and tangible, thanks to Ogut.

Waiting for a Bus

Another Ogut’s site-specific installation is an interactive, rotating carousel called Waiting for a Bus. The installation was initially conceived as a playful bus shelter, inviting people to enter the carousel and enjoy the unfolding cityspace of Victoria Square, but it was relocated to Rolleston Ave, next to Canterbury Museum in Christchurch, New Zealand. This installation reveals Ogut’s interest in patterns of public movement in urban areas and reflect’s on the everyday occurrence of waiting and taking pauses between important activities.

Ogut’s socially engaged and often humorous, amusing work, makes us notice and question the systems of everyday life we’re usually unaware of. Through his insightful pieces, the artist is challenging the routines of everyday life as well as his role of awakening the critical consciousness of his audience. Ogut’s work has been widely appreciated and it was exhibited in more than 20 international solo exhibitions in the last couple of years.