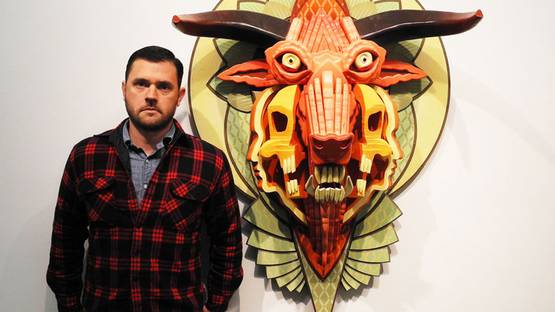 AJ Fosik is an American artist, known for his carefully crafted and vividly colored wooden sculptures. Fosik’s feral creations take the shape of fantastic beings that communicate a subversive, anti-religious commentary through the depiction of hyperbolized fictional gods. The artist's works are influenced by the concept of totems and fetishes. His nameless and meaningless pieces are created in order to examine the nature of spiritual iconography and the nature of existence. He is vocal in expressing his dissatisfaction with the way in which new urban art is moving, as it is becoming more and more a part of the mainstream culture. By using wood and found materials, he creates figurative, eclectic and intricately designed three-dimensional works that intrigue and provoke.

AJ Fosik was born in Detroit, Michigan, where he also grew up. No one in his family was an artist, nor had any interest in making objects. He wasn't raised religious, however, he went to catholic school for a while, before he was expelled for fighting. Later on, the artist attended Parsons School of Design in New York City. Fosik obtained his Bachelor of Fine Arts in Illustration in 2003. He is a self-taught woodworker. After that, he moved across the United States several times, as he liked the idea of nomadic lifestyle and traveling as much as possible. Enjoying the freedom of nomadic exploration, he lived in various cities, such as Denver, New York, San Diego and Philadelphia. As much as he likes traveling abroad, Fosik claims that he would never move out of the United States. Prior to creating his three-dimensional works and installations, Fosik was interested in urban art. While most graffiti writers work by night in order to avoid being caught, AJ Fosik preferred working in the early morning, because nobody was awake on Saturday around 6 AM.

Prior to creating his three-dimensional works and installations, Fosik was interested in urban art

The Art of AJ Fosik

The artist's work ethic is strong, almost compulsive, his skill finely honed, and his art truly unique and immediately recognizable. The sculptor, who doesn't believe in having any free time, started making his three-dimensional artworks, which he hesitates to call sculptures, in 2004. At some point, AJ Fosik shifted from 2D to 3D works, which are essentially similar to his 2D pieces, as they are constructed in the same way. This rebellious workaholic enjoys investigating the boundary between 2D and 3D. Fosik tries to stay away from the computer as much as possible and do all his work by hand. For him, the computer is not a medium, but just a tool. The artist, who is passionate about his artistic improvement, has admitted that he cannot stand his old works. Once, while clearing the gallery, he threw away all of his old artworks.

Fosik tries to stay away from the computer as much as possible and do all his work by hand,

Fosik's idols are nameless, assigned no specific meanings or powers, beholden to no formal faith — real or contrived. They are not meant to contribute to some grand theological narrative of the artist’s design. His artwork explores the powerful medium of language and metaphor. Fosik’s animal subjects and anthropomorphized creatures are built using a complex process in which each form is carefully handcrafted by arranging hundreds of pieces of individually cut and varnished wood, which the sculptor paints in vibrant colors and patterns. Sharp teeth, claws, and eyes emerge once the creatures are completed – some are constructed as freestanding forms while others are wall-mounted, referencing modern taxidermy practices. The presence of his fantasy creatures is intimidating. Evocative of American Folk Art and inspired by subversive cultural influences that shift complacency, Fosik’s work suspends comfort with the appeal of familiar symbols and images. In this dynamic tension, the art and viewer come together in an expanded definition of culture and assumption. AJ Fosik looks up to anyone who embraces their existence, despite its meaninglessness.

Against the Infinite was AJ Fosik's 2013 exhibition at Jonathan Levine Gallery in New York, and his third solo show at the gallery. The exhibition presented fantasy creatures at odds with themselves, worried about their mortality. The body of work was influenced by the book The Denial of Death by Ernest Becker, who won a Pulitzer Prize in 1973 for his work on psychology and philosophy. The 3D beasts, hanging on the walls of the gallery or displayed as free-standing sculptures, were battling their own internal conflicts and their dualistic nature, torn between their physical self and a symbolic self. The exhibition also featured a large installation, consisting of 30 individual heads on panels, which formed a stunning geometric shape with 30 sides. The notions of mortality and invention were presented through skulls, sickles, swords and exposed rib cage.

The notions of mortality and invention were presented through skulls, sickles, swords and exposed rib cage

His work has been featured in numerous popular publications

The recognitions from all over the world have allowed AJ Fosik to exhibit his works in numerous galleries throughout the United States, in the cities such as New York, Philadelphia, Austin, Miami, San Francisco, and abroad in Paris and Mexico City. His artworks were also displayed at places like Jonathan Levine Gallery and Giant Robot Gallery in New York, Vice Gallery in Mexico City, Guerrero Gallery in San Francisco, Galerie L.J. in Paris, and David B. Smith Gallery in Denver.
The sculptor is represented by the Library Street Collective in Detroit, and the Jonathan Levine Gallery in New York, United States.