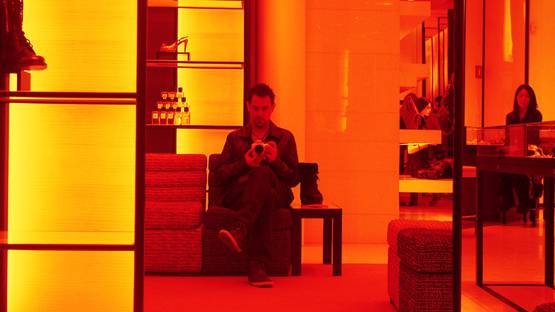 Akif Hakan’s sensual photographs are capturing more than just erotica or glamour. Hakan, who is a Turkish-American photographer, carefully designs his characters and scenes, influenced by fashion, cinema, the history of photography and experimental portraits of Man Ray. His goal is to go beyond the charted territories and free himself from the traditional photographic rules so that he can combine various techniques and create a different kind of storytelling. His glamour shots as well as the artistic nudes have a strong cinematic feel, almost as if they were freeze frames from a movie screening.

Hakan’s most recent body of work is paying homage to the artist’s fascination with Asian cinema and culture. Lighting and palette of Hakan’s Hong Kong series are inspired by movies such as Wong Kar-Wai’s In the Mood for Love. Hakan created the sultry noir atmosphere with his dark backgrounds, golden highlights and luxurious textures against the delicate naked skin of his models. Other photos from the artist's Asian series offer an insight  into the avant-garde Japanese fashion. In his Fashion is Image series, Hakan represents the Harajuku fashion style, named after one of the most popular Tokyo urban quarters. His models wear heavy make-up and elaborate costumes embellished with toys or flowers, as well as S&M corsets. Hakan’s artworks depicting Tokyo urban and alternative scene are inevitably raising the questions about cultural and identity issues of the Far East.

Thanks to his beautifully crafted photographs which tread the line between glamour photography and fine art portraiture, Hakan is recognized as one of the best new generation photographers by multiple fashion magazines and he was the finalist in the International Color Awards. His ability to capture the intimate, domestic atmosphere and mix dark, gloomy sentiments with glamour and fashion is truly outstanding. Hakan excelled in creating commercial art that feels strongly personal, in the sense that viewers feel strangely connected to the subjects in his pieces.

The artist is represented by Galerie Jacob Paulett while his additional pieces can be purchased from Yellowkorner Gallery.

Akif Hakan is based mainly in Hong Kong and works in Tokyo, Taipei, Istanbul, London and the USA.

Featured image: Hakan's portrait
All images copyright of the artist.