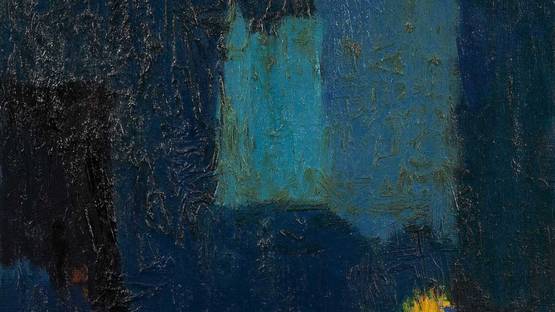 An artist who belonged to the early generation of New York School Abstract Expressionists, Albert Kotin was known as a great colorist, with a palette of blazing yellows and glowing reds, delicate pastels, funereal blues, and pitch blacks.

Born in 1907 in Minsk, Russian Empire, Kotin emigrated to the US in 1908 and became a US citizen in 1923. He studied at the National Academy of Design in New York City with Charles Hawthorne, at the Académie Julian, the Académie de la Grande Chaumière and at the Atelier de Fresque and the Académie Colarossi, Paris, France; at The Art Students League of New York, New York City. Under the GI Bill, he went to study with Hans Hofmann in Provincetown and in New York City.

After the war, Kotin joined the "Downtown Group" that represented a group of artists who found studios in lower Manhattan, and later, the "Artists' Club." By the 1950s, his pioneering artistic innovation has been recognized across the Atlantic. His early abstractions featured a range of many-colored shapes - wedges, panes, blobs, set against background washes, soon evolving into Pollock-ian drips and shapes that became less distinct and raggedly interpenetrating. In later years, he began including words into his canvases.