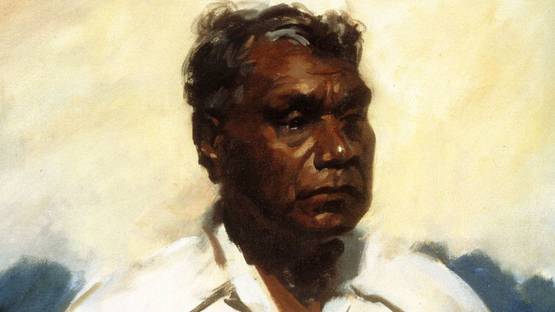 Albert Namatjira is one of Australia’s great artists and arguably the most important Aboriginal painter that ever lived. His landscape depictions of the Australian outback were done in a strong western style, fundamentally different from traditional Aboriginal art. The paintings he created are one of the most iconic pieces of art his country ever had due to their beauty, but also to the fact they gave Albert Namatjira the fame that led to him and his wife becoming the first Aborigines to be granted an Australian citizenship. Even if you decide to ignore his artistic side for whatever reason, you still have to appreciate the man that almost single-handedly provided his fellow Aborigines an opportunity to live as equals to the Australian's caucasian population.

Albert Namatjira was born at Hermannsburg Lutheran Mission, near Alice Springs in 1902 - however, he was not primarily named Albert as his parents decided to call him Elea. This was his name up until the point his parents decided to convert to Christianity and baptised their son as Albert. Growing up as an aboriginal boy in a Mission's strict Christian society was a real problem for young Albert as he was still very much pulled towards his cultural roots. At the age of thirteen, Namatjira left the Hermannsburg Lutheran Mission, returned to his tribe for initiation and was exposed to traditional culture as a member of the Arrernte community. This filled Albert's heart with joy and he never went back to his Christian parents. He developed a deep love and respect for his land - something that will be the focal point in his future painting career. Namatjira married his wife Rubina at the age of eighteen and this proved to be a big difficulty in his community - she was of the wrong skin group and Albert was banished from the tribe in 1928 for the decision to marry her. Namatjira used this time to travel and it was then he saw much of Central Australia while riding on the back of his camel and delivering goods all over the country. This proved to be the key moment of his future art as he never before that time showed any real interest in painting, having done nothing but a small amount of rough artwork in his youth. This all changed when Namatjira was introduced to western-style painting for the first time through an exhibition in Melbourne, during the year of 1934. He stumbled upon it on accident while on a break and ended up spending hours viewing paintings.

Namatjira's love for Australian outback is what fueled his art

After visiting the Melbourne exhibition, Namatjira befriended one of the artists that were displaying his paintings. This man's name was Rex Battarbee and Albert soon became the artist's guide through the wilderness of Australia, leading him to places that were beautiful enough for Rex to paint. This journey lasted for about eight weeks. Since they were friends, Battarbee was not expected to pay Albert - however, in return for guiding him, Rex taught Namatjira how to paint with watercolours. It was the only tuition he was to receive in his life. This method of painting came so natural to Albert that he soon exceeded the skill of his mentor and it wasn't that long before he started to develop his own personal style. Inheriting Rex's genre, Albert's landscapes regularly highlighted both the rugged geological characteristics of the land in the background and the distinctive Australian flora in the first plan. Albert's work also had a strong note of illumination, especially in the gashes of the land and the twists in the trees. All the colors in his landscapes were characteristic for his ancestors and their art, but his style and genre was appreciated more by Europeans because it met the aesthetics of western art. Albert Namatjira held his first solo exhibition in Melbourne, in 1938. He displayed forty-one piece and all of them were watercolor depictions of landscapes. The pieces were sold in record time and Namatjira was starting to get more orders and requests then it was humanly possible to achieve.

Artistic Peak Of The Aboriginal Painter

The beauty of the paintings and the exotic back story of the artist made sure Namatjira's works sold very quickly. Logically, it provided him with an excellent financial state and a great motivation to not stop painting. For ten years Namatjira continued to paint, his works continuing to sell and his popularity rising. He was even given a nod by Queen Elizabeth II when she awarded him the Queen's Coronation Medal in 1953. Although he was popular, critically acclaimed and wealthy, Albert Namatjira never left his Australian outback. Why leave the very thing that makes you the happiest man on Earth? His artworks were colourful and exclusively depicted landscapes. His earlier pieces were usually his interpretations of waterholes (with excellent reflection effects, might we add) and green hills. He has been known for his masterful usage of contrasting colors - a feature characteristic for western painters. Some of his most famous works are the paintings titled Ajantzi Waterhole (1937), Red Bluff (1938), Central Australian Gorge (1940), Flowering Shrubs and Ghost Gum Glen Helen. Namatjira's love and passion for trees had many critics compare his landscapes to pieces of portraiture due to the amount of emotion he was able to channel through them. Albert was well aware of that fact and this was the only aspect he would often hold against his fellow painters - for example, he once said about William Dargie's work: He does not know how to make the side of a tree which is in the light look the same colour as the side of the tree in shadow... I know how to do better. Namatjira has been known to act this way when it came to painting (especially the watercolor technique) but was otherwise considered to be a wise, calm and a genuinely kind man.

Due to his wealth, Namatjira soon found himself the subject of humbugging, a ritualised form of begging. Arrerntes are expected to share everything they own with each other and many of his fellow tribesman often abused that privilege. It has been noted that Albert Namatjira at one point financially cared for over six hundred people! In an attempt to run away from such situations, Albert tried on several occasions to lease or buy a piece of land in order to live in isolation and focus on his paintings. Sadly, he was cheated and rejected every time he tried to leave to the outback. This combined with the obligation of feeding hundreds of mouths led Albert Namatjira to a point where he became completely bankrupt. Despite the fact that he was held as one of Australia's greatest artists, Namatjira was living in poverty. This resulted in a wave of public outrage. After a few tough years, things were getting better as Albert managed to start making ends meet and in the historic year of 1957 the government exempted Namatjira and his wife from the restrictive legislation that applied to Aborigines in the Northern Territory. The law entitled them to vote, own land, build a house and buy alcohol. This, however, led to more problems, as his tribesmen - who were not entitled to such rights - wanted to share everything with the artist. Trying to balance between the boundaries of law and his personal kindness, Namatjira was arrested for a bottle of whiskey found in wrong hands. He was sentenced to six months in prison but was released after only serving two months due to medical and humanitarian reasons. Depressed after his incarceration, Namatjira continued to live with Rubina in a cottage at Papunya, where he suffered a strong heart attack. He was transferred to Alice Springs hospital where he spent the last hours on Earth with his wife and Rex Battarbee. He died soon after that, as his weakened heart was not able to cope with pneumonia. Albert Namatjira passed away peacefully on 8 August 1959 in an Alice Springs hospital bed.

At the time of his death, Namatjira had painted a total of around two thousand paintings. Unfortunately, after he met his demise, Albert's unique combination of genre and style started being looked down on and many critics stated that his work was too corrupt by Western standards, that the artist purposely betrayed his own nationality and was never a true Aborigine. Over time, these kinds of false stories died away and today Albert Namatjira is hailed as one of the greatest Australian artists and a fighter for Aboriginal rights. He painted his country and was both prodigious and successful while his paintings departed significantly from the abstract designs and symbols of traditional Aboriginal art. Namatjira's richly detailed, beautiful watercolours of the outback stand as maybe the most famous example of Australia's indigenous populace's struggles to find a place of their own in the modern world. This great painter captured Australia’s heart and soul in his artwork.