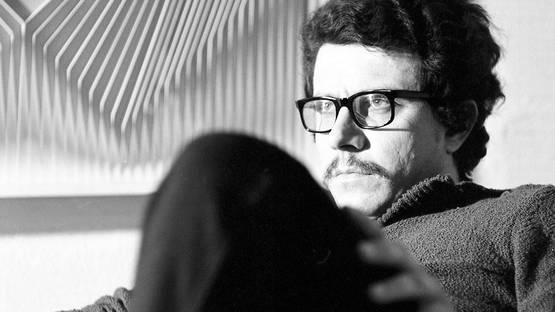 Alberto Biasi is an Italian artist, best known for his leading role in promoting kinetics art and as the co-founder of very influential artistic group, called Gruppo ENNE, who together with the Gruppo T developed an optic-perceptive researches that will be gathered under the name of Optical Art.

Biasi was born in Padua and his family had already produced artists, Lavinia Fontana, a well-known name in 17th-century painting, and a poet, Tirsi Leucasio, a founder of the Arcadia academy together with Metastasio. Alberto  lost his mother during the war and went to live with his paternal grandmother at Carrara San Giorgio, a small village in the country outside Padua, where she ran a tavern. He grew up in contact with the local people in an extended family atmosphere until his return to Padua to attend high school. This was followed by studies at the school of architecture and the advanced course of technical drawing in Venice, where he was awarded a scholarship  by Paolo Venini. These years marked the beginning of a passion for art with close study of the key 20th-century movements. Neoplasticism, Futurism and Dada are deeply rooted in the background of the young Biasi.

He started teaching technical drawing and art history in the public school system in 1958 and was assigned a permanent post as teacher of graphic arts applied to advertising, which he held uninterruptedly from 1969 to 1988. His own artistic activity took shape at the same time, and he received the first prize at the 4th Cittadella Youth Biennal from the hands of Virgilio Guidi in 1959, the first public award won by an artist who, though young, was already developing various stimuli, political ideals and artistic concerns.

Biasi based his own art on new canons in those early years. Interaction between the viewer and the work became an indispensable cornerstone and movement – in the passive sense of virtual motion, the appearance of movement – led the artist to address the problems of kinetics and the associated investigation of visual perception and the individual reaction to luminous stimuli. The activity of this period is marked by the Trame (Patterns), an initial study of the interference of the movement of vision and natural light on a layered static surface of natural character developed through the observation of complex and primitive elements like beehives. Alongside the Trame, he was soon producing Rilievi ottico-dinamici (Optical-Dynamic Reliefs) of laminar structures in contrasting colors superimposed so as to produce a visual event that depends on the movement of the spectator, who thus becomes an “actor” jointly involved in the work. The other series that made their appearance in this period include Forme dinamiche (Dynamic Forms) obtained thorough the torsion of thin sheets of material laid out in rigorously calculated geometric arrangements on backgrounds of different colors, Fotoriflessioni (Photoreflections) in real motion, and perceptually unstable Ambienti (Environments), ever-changing atmospheres of light and liquid in motion. Prime examples of that include Grande Tuffo nell’arcobaleno (Great Dive into the rainbow), Eco (Echo), and the triptych Io sono, tu sei, egli è… quindi siamo (I am, you are, he is… therefore we are).

The Group N had broken up in the meantime,  marking the end of a collective approach adopted as a result of strong political and ideological commitment (exemplified by the fact that Biasi described himself during this period as an “artistic operator”, thus stressing the social aspect of this activity). He continued on a solo basis developing themes that have been his “happy obsession” ever since. His civic commitment has, however, also continued over the years with full participation in the life of the city. As director of Padua’s provincial agency of tourism in the late 1970s and early 1980s he developed cultural and artistic projects regarding Padua, its cultural history and its surrounding natural environment. Meanwhile, his art went through new phases of study and experimentation. Deeper investigation of the impact of natural light led to the Politipi (Polytypes), a new series of works of unquestionable hypnotic power produced by means of torsion, the superimposing of planes and the interweaving of sheets and strips of material, thus interacting in the pursuit of harmonic movement with the third dimension of depth, alluded to more than actually addressed. The Politipi of the 1970s evolved in the following decade with elements of figuration. The perceptual effects became increasingly complex, attracted by a  focus that encloses further three-dimensional effects of depth, illusions or realities of the light intercepted in the layer of superimposed material. The interplay between spectator-actor and work became increasingly structured and free, and form was enriched with readily recognizable images of which the eye can be confidently certain. Lurking within and circumscribed by them were, however, new optical “tricks” caused by the manipulation of light, which changes together with the shifting of viewpoint, thus attesting to and confirming the absolute variable of perception in the spectator.

The Politipi were then enriched in the 1990s with an element previously somewhat overlooked by Alberto Biasi, namely painting, through the insertion of color, traces, shadows and allusions as a supporting counterpoint to the complex structure of layered surfaces. The resulting Assemblaggi (Assemblages), often produced as diptychs and triptychs, have developed in recent years an increasingly rigorous, coherent and severe handling of color tending towards the monochromatic. In the combination and superimposition of assembled surfaces, the extreme rigor of monochrome highlights the “breaking point” of crisis in the linear reading, where the planes of color converge in a three-dimensional source, thus alluding to an energy-generating space. And it is this space that constitutes the starting point for Biasi’s move towards sculpture, a new interest bus also one implicit in his oeuvre as a whole. Weathering steel, aluminium and methacrylate are the materials used by Biasi to address the challenge of three-dimensional space, some of which designed for open spaces. Totems vertical slabs and interrupted spirals, helical structures of closely meshed metal pipes, became transpositions and reinventions, the results of Biasi’s “happy obsession” and constant exploration in the field of visual perception.