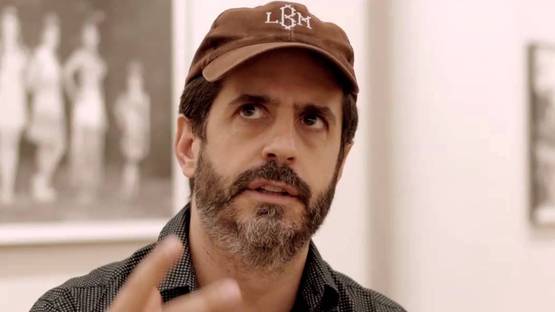 Alec Soth is an American photographer from Minnesota and a member of the prestigious Magnum cooperative. His style is based on the American style of photography which is distinguished by the on the road philosophy of taking photos. The pioneers of this tradition, such as Walker Evans, Robert Frank, and Stephen Shore, are just some great photographers by whom Alec Soth was inspired. What makes his work unique is that he discovered this style on his own by randomly wandering around finding things, instead of reading about it. Because of this, his creativity came directly from him, instead of from the inspiration by the photographers before him.

When Huckleberry Finn decided to travel the great river Mississippi, there wasn’t a clear goal in his head. He was traveling for the sake of traveling. Similar stories lie behind the photographer's work. But, instead of being fiction, the photographer's work is chronicled by himself, instead of by a writer. It seems as if traveling and recording the experience is deeply rooted in American tradition. Songs are sung, books were written, and lastly, photographs are taken by the likes of Alec Soth. From West to East, every inch of unique and beautiful American heritage has been documented in one way or another. When speaking about Soth and different art forms that have documented this American desire, it can’t go without mentioning another important element of his style of photography. Although it is photography, his work has a strong cinematic feel, as if any moment the images will start to move and tell the story to which this single image is introducing. Encompassing most Midwestern part of United States, Soth has created large-scale American projects through which he documented the outcasts, dreamers, strangers, and everyday people. He has photographed around the entire continent of America, but somehow the part that attracted him the most was the part most of the people just fly over when trying to get from one side to the other. Although his work is mostly compared with the work of Walker Evans and Stephen Shore, his true first inspiration came from discovering Diane Arbus and her work.[1] As Arbus was known for photographing marginalized people such as dwarfs, giants, transgender, etc, it inspired Soth to take his chance by traveling and documented the great American unknown. Parts of the America that are full of life, but the majority either doesn’t go there or simply doesn’t notice the beauty found on the edge of the society.

Although it is photography, Soth’s pictures have a strong cinematic feel

Sleeping by the Mississippi

While traveling the Mississippi river, Soth created and self-printed a book title Sleeping by the Mississippi. This brought attention to his work and in 2004 his image title Charles was picked for the poster of 2004 Whitney Biennial.Soth admitted he was very shy as a child and this shyness reflects in his work. The thing is, it doesn’t reflect in a negative way, something people would initially think, but rather in a creative and cooperative fashion. He often feels nervous while photographing unknown people he meets, but as Soth himself said: My own awkwardness comforts people, I think. It’s part of the exchange. Another too early brought presumption would be this exchange is based on giving attention to the marginalized people for a photograph, but the exchange runs on a much deeper and personal level. It is fueled by a positive need to document things which are often ignored. These people already have the beauty of their own and people like Soth play the role of the medium to bring this beauty to a wider audience. The empathy is the main ingredient of his work and although he’s a member of Magnum, his work isn’t pure street photography. Nevertheless, it shares the values by connecting not just with the people found on the streets, but outside them as well.

While traveling the banks of river, the photographer from Minnesota created and self-printed a book titled Sleeping by the Mississippi

Alec Soth and His Portrayal of the Unusual

When saying on-the-road-photography, we cannot but think it’s an unplanned style of photography. For most of part, it’s true as people like Soth can’t know what they will experience. But, they can imagine what they would like to experience as a sort of a goal. This goes for Soth who would often have notes taped to the steering wheel of pictures he would like to take. One of the lists for the Sleeping By Mississippi project stated: pilots, amateur paintings, mattresses, Memphis, border collies, house boats, unusually tall people, museum guards, snow, lent, other photographers, Duluth, sleeping children, neighborhood bars, icehouses, prostitutes, Bogota, supermarket cashiers, model airplanes, sheep, sedans, the quad cities, swimming pools, suitcases, and the Mississippi river. Having an idea of what can be found on his list is important as it’s the point that distinguishes him from before mentioned inspiration, Diane Arbus. Unlike her who focused solely on rejected part of society, Soth is interested in everything and nothing. More specifically, he doesn’t ignore one extreme for the sake of the other. His photo wishes might seem random, but in reality, they are all created from a mind untainted by the outside world of prejudice. Through them, Soth wants to create one main story where each picture leads to another. This is yet another aspect which draws the line towards the similarity with cinematography - creating a story with its beginning and the end. His lists can include anything, from things as common as a tent to unusual things most people would ignore, such as mushroom hunters. It’s unpredictable, which is the reason why Soth’s work keeps its freshness even after many years of work.[2] When photographing people he has a simple procedure. He’ll always ask them for permission and he’ll wait for the model to get comfortable. This way, Soth enters the unique world of an individual where he becomes able to document the habits and rituals of each person. Interestingly, Soth brought this ability to the point where it’s no longer mandatory for the person to actually be in the shot, a landscape of person’s house or a close up of his/hers belongings is enough.

Sleeping With Mississippi was published in 2004 and the following book was Niagara from 2006. Niagara followed a similar pattern as the previous one, documenting the outskirts where the civilization and wilderness collide and more importantly, people who are the main part of this mixture. One of the most known photographs from this book is of a bride sitting outside a small building, most likely a local motel. This picture was taken during his trip to Niagara Falls where he made an arrangement with a local wedding chapel to photograph couples as soon as they got married. Interestingly, some of the newlyweds photographed in this period were nude. Expanding his view on life outside photography, Alec Soth managed to do in a 4 year period when he created Broken Manual alongside Lester B. Morrison. This book, as the title says, is a manual for people who are looking to somehow get away from their own lives and creating a new one. Unlike his previous work, here he gave priority to unique types of people such as monks, survivalists, and escapees. His photography might come from curiosity filled with shyness, but they are the most sure-footed documentation of entire generations that either lived or are living in the United States.[3] American curator John Szarkowski said this about his work: It isn’t what a picture is of, it is what it is about. This short sentence could possibly be the best description of his work. After a couple of more books, Soth created his own book publishing house, Little Brown Mushroom in 2010. It made it easier for him to publish his own pictures and to utilize the time as much as possible, but it also opened a new possibility, to publish books of like-minded people.

Niagara documents the American outskirts where the civilization and wilderness collide

Traveling Between Europe and the United States

Besides taking photographs of random people, Soth also photographed celebrities and their homes, most notably Johnny Cash and his boyhood home in Kingsland, Arkansas. A small cottage with a tree triple its size and a large field in front, it summarized everything about the childhood of the Man In Black. Interestingly, it summarized the life before the fame, something that probably wasn’t done unplanned.There are a couple of lines Alec Soth and his work walks. One is the line between romance and cold reality, while the other is between documentary photography and photography as a fine art. Somehow, Soth manages to combine all these elements into one meaningful whole. In reality, anybody can walk these lines and encompass them into their work, but those fine little details that make a piece of art great, only artists such as Soth have. Although he traveled countless times on the relation USA-UK, two trips can be said to be most important. One was in 2015 when he went to the UK to promote his then latest book titled Gathered Leaves, and the second trip happened around 5 years earlier. During this trip, Soth was allowed for a work visa although he didn’t apply for one. The visa was given under presumption if he was caught photographing without one he would be put in prison for as much as two years. Because of this, during this trip, he hired his young daughter to take pictures while staying in Brighton.

Soth manages to combine all these elements into one meaningful whole

The photographer's work has been featured in countless solo and group exhibitions. Besides in the UK, Gathered Leaves exhibition was stationed also in the Finnish Museum of Photography in Helsinki and many other places. It was the biggest Soth's exhibition to date as it brought together four of his best-known works: Sleeping by the Mississippi, Niagara, and Songbook. Another recent exhibition titled Hypnagogia showed yet an entirely different part of his work. 30 good images from 20-year of exploration time were featured. The element connecting these 30 specific images was the feeling of being neither awake nor asleep. These photographs presented this mid-state through people and landscapes. An exhibition similar to Gathered Leaves was featured in Walker Art Center titled From Here To There, Alec Soth’s America. The title couldn’t have been more appropriate as it was a comprehensive exhibition of his entire work until 2010.Besides before mentioned Sleeping by the Mississippi (2004), Niagara (2006), Broken Manual (2010), and Gathered Leaves (2015), Alec Soth also self-published Fashion Magazine (2007), Dog Days, Bogota (2007), and The Last Days of W (2008).

Fellowships and Prizes of Alec Soth

Alec Soth’s first big prize was in 2003 when he was handed Santa Fe Prize for Photography and also received a fellowship from the McKnight and Jerome Foundations. His work is both in major public and private collections. Most renowned places that hold Soth’s work are San Francisco Museum of Modern Art, the Museum of Fine Art Houston, the Minneapolis Institute of Arts, the Whitney Museum of American Art, New York, and the Walker Art Center.Soth has photographed for The New York Times Magazine, Fortune and Newsweek, in 2004 was nominated and in 2008 accepted into Magnum Photos.

Featured image: Alec Soth's Portrait - image via ytimg.com
All other images copyright of the artist.