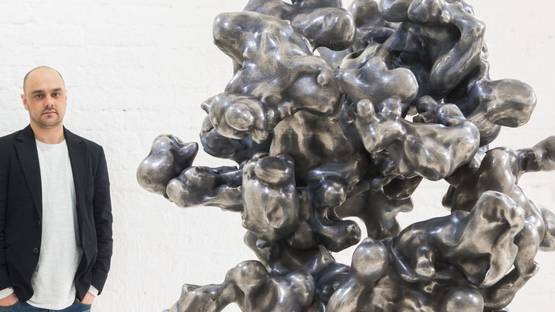 Many great artists have been inspired and have captured grotesque moments throughout the history. Dali, Goya, Duchamp, and the whole Dada movement are considered as chronicles of history. Alex Hoda, a young British sculptor, continues with this tradition, pushing the boundaries even further, but, interestingly, doesn’t consider his art to be grotesque. He actually wants the viewers to see it as unusual. Human psychology and our need to observe things that are not normal have always been critical in his approach. In his recent work, he plays with his viewer’s pre-judgements and subconscious, making them arrive at false premises by misinterpreting what is in front of them.

From an early age, Hoda was exposed to Classicism and Neo-Classical sculptures in Victoria and Albert and the British museums, where he developed a relationship with the figures, but he always wanted to use that perfect figure, but also to go as far as he could in distorting it. His artworks are perceived as vulgar and offensive, and that is something he constantly tries to avoid. Hoda is interested in creating a new and fresh response to the ideas of rutting, sniffing, mating, suckling, motherhood. That where the animal forms step right in, as the similarities to the embarrassing anecdotes could be avoided by making his sculptures animalistic, which allows the artist to explore human existence and desires without being explicitly pornographic. He works with marble, mixed metals, and bronze, but also extensively uses non-precious material like plasticine, plastic, polyurethane rubber, latex, polyester resin, and fiberglass.

The artist uses animal forms in order to avoid the embarrassing anecdotes, and explore human existence and desires without being explicitly pornographic

Hoda has studied at the Wimbledon College of Art, the Goldsmiths College, and the Royal Academy Schools. Like many others, he is also drawn to the grotesque. For him, the scenery of the car crash possesses beauty and style and has an equal, if not bigger merit than something more ordinary. Seeing the Elephant Man standing in a big glass box while the students observed him stayed carved deep in his memories, and made him realise that behind everything grotesque exist senses of both the sympathy and the sadness. It forced him to try to understand this human ambiguity of always seeking beauty but, at the same time, not looking away from something ugly. The artist has exhibited throughout Europe, Australia, and the USA. Even though he is a young artist, his pieces are included in a number of prestigious collections: Richard Greer, John Richardson, Mary Moore, and Larry Gagosian, to name a few.

He is trying to understand this human ambiguity of always seeking beauty but, at the same time, not looking away from something ugly

Questions of birth and growing up, the deformed, violent, ugly, aggressive, questions about our sexuality, love, our pride and our death – it seems that entire human life is central to Alex Hoda. He is pushing the limits so far that he’s breaking the traditional borders between the sculpture and its viewers, forcing a confrontation between them. And in that confrontation, the viewers will learn to accept who they really are and not run away from it.

He is represented by the Lisabird Contemporary in Vienna.