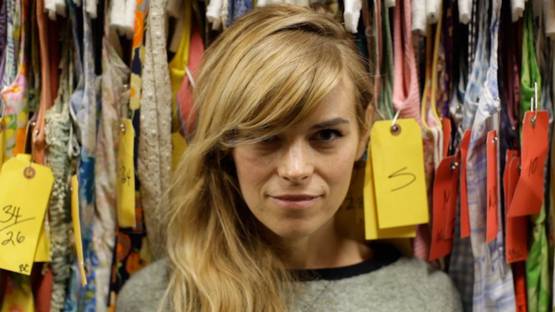 Alex Prager is an American photographer and filmmaker, born on November 1, 1979. She is a self-taught photographer who staged sets and models to create "film-like" images that invite a myriad references, not only to the history of Hollywood and photography, but also the cinematic image in art contexts. The subjects of her works, exaggerated and costumed, sometimes "hyper-real" speak to the ambiguity of seduction and spectacle.

Prager began her photography practice after viewing an exhibition of William Eggleston's at the Getty Museum in 1999-2000. As a self-taught artist, she was inspired by the way that Eggleston could "take what looked like a mundane, two-dimensional snapshot and make it feel completely alive and unique." Her staged color photographs are often described as synthesizing the influences of Cindy Sherman, Philip-Lorca diCorcia and Douglas Sirk. In 2005, Prager created a group of works, The Book of Disquiet, as an exhibition and joint publication with artist Mercedes Helnwein. She began to gain more attention with the following series Polyester in 2007, which focused more on Southern California's cinematic background with striking, uncanny portraits of various women and girls. Her next series, titled The Big Valley, shown in 2008 at Michael Hoppen Gallery in London and in 2009 at Yancey Richardson Gallery in New York, expanded upon her previous images and integrated references to disparate time periods. In 2010, along with the series Week-End, Prager created her first short film, Despair which was conceived as a moving, full-sensory version of her photographic work. Set in 1960s Los Angeles, the four-minute film is inspired by the 1948 film The Red Shoes about a ballerina, played by actress Bryce Dallas Howard, whose obsession with dance conflicts with her need for love, ultimately leading to her suicide. The film was included in Museum of Modern Art's exhibition New Photography in 2010.

In 2012, Prager diverged into creating images that deal primarily with the themes of disaster and spacial turbulence with the series Compulsion. Prager's second short film La Petite Mort was made simultaneously and employed the narration of Gary Oldman and starring French actress Judith Godreche. Prager's latest series, Face in the Crowd, debuted at Washington D.C.'s Corcoran Gallery of Art. Shot on a Los Angeles soundstage in early 2013, the large-scale photographs feature dense crowds in public spaces. The series also includes a 10-minute three-channel video installation featuring Elizabeth Banks. For the shoot, Prager personally selected and dressed friends, relatives and 150 extras, and used a Hollywood sound stage to represent places where people gather: city streets, a movie theater, a beach, an airport. Described as portraying "in-between-ness, a non-space through which we are obliged to pass", this series reflects the complicated and contradictory emotions and disconnections associated with crowds.