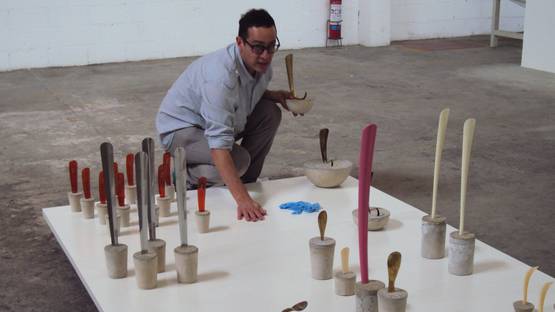 In everyday life, we’re surrounded by a lot of things, whose true purpose is hiding in plain sight, often escaping our attention. Alexandre da Cunha is a Brazilian artist who refers to his artistic practice as pointing rather than making. He’s pointing at objects that already exist and highlights and reveals new and sometimes unexpected meanings. Continual exploitation of an object by twisting its meaning is the core of his process. The artist is also known for his exploration of the hybrid and complicated national identity. The potential of his objects is emphasized by pointing out their specific aspects. The humorous element is present, but hidden on the first look, and the accent is the perfect timing to tell a joke because otherwise something intended to be funny becomes dull and not entertaining.

The artist mostly works in installations, sculptures, and assemblages, but painting as well, where his pieces are often made of mass-produced consumer products or materials used in industry, like foam or concrete. Da Cunha’s attention is equally distributed between the formal properties of these objects – shape, color, and texture, and their social, historical, and cultural resonances. His work is influenced by the architecture of European Modernists, Op Art, and of course, the great Marcel Duchamp. The artist acknowledges Duchamp’s influence and states that his ideas are so universal in contemporary art that almost all artists are influenced by a Master at some point of their artistic careers.

Like many artists, da Cunha was also inspired by Marcel Duchamp

Da Cunha was born in Brazil but he’s been living in London for more than a decade. He studied at the Fundação Armando Alvares Penteado in São Paulo, Brazil, Royal College of Art in London, and the Chelsea College of Art, also in the capital of England. His work revolves around reclaiming, decontextualization and altering the objects, and in doing so, they slowly begin to lean towards the sensibilities of other objects. When speaking about mimicry, so ever-present in his pieces, there are two things at work – on one side, the specific periods in art history are referenced by all the works, playing the joke, like when deck chair references minimalist painting – the other side is the artist’s actual interest in the origins of the materials, like the flags and the beach towels they’re made of.

The artist references periods of art history, and he's interested in the origins of the materials

Da Cunha’s practice could be described as a satire of the modern art. The element of humor is extremely important, and the artist deeply enjoys in the fact that his pieces look very formal and rigid at the first sight. But, once more time is given to studying the artworks, the viewers notice there are hidden sides, often hysterical, that reveal themselves. For him, the most important things are to be precise when it comes to the timing of his jokes, since the objects trying very hard to be funny, often are not funny at all, but also to discover how to find and how to get the joke right.