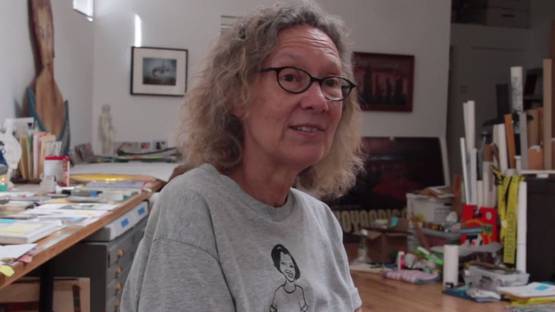 Alexis Smith, born in Los Angeles, in 1949, is a multimedia artist who uses collage and installation to create alternate narratives and understandings of popular culture. Her work, which has been associated with the pop art movement in the sixties, explores America's cultural, social, and political evolution. She considers herself a “product” of the entertainment industry.

As a girl Smith created collages by cutting up and combining words and images. It was only later that friends encouraged her to take art classes. She attended the University of California, Irvine and received a Bachelor of Arts degree in 1970. In college, she changed her name to Alexis Smith, the name of a Hollywood actress of the 1940s and 1950s. Since the 1970s, Smith has produced collages, artist's books, and gallery installations that combine found objects, images, and texts. She draws inspiration from American literary figures such as Walt Whitman, Raymond Chandler, Jack Kerouac and Gertrude Stein, as well as from pop culture, movies, romance novels, magazines, and advertising. Her collages and installations mine pop culture and pulp fiction to produce irreverent critiques of consumerism and celebrity culture.

Artist has been recognized through numerous awards and fellowships, including the Rockefeller Foundation Study Center, Bellagio, Italy, a grant from the National Endowment for the Arts, and an honorary doctorate from Otis College of Art and Design, Los Angeles. Her work has been the subject of numerous solo and group exhibitions throughout the US, including at the Museum of Modern Art, New York, the Institute of Contemporary Art, Boston, Whitney Museum of American Art, New York, the Walker Art Center, Minneapolis, The Museum of Contemporary Art, Los Angeles, and the Wexner Center of the Arts, Columbus.