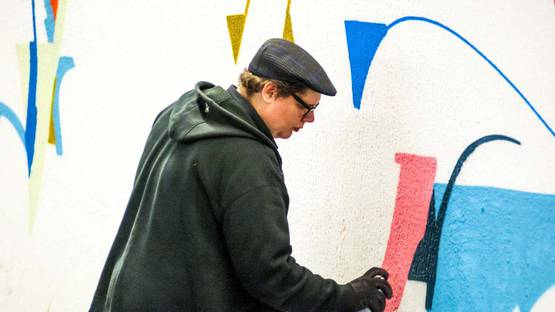 Alexone Dizac is a French artist, painter and illustrator, coming from the Graffiti world. He is best known for mixing paint drips, ghost tags drawn with a marker pen or a spray can, flames, one-line geometrical patterns, funny punchlines and of course his surrealistic bestiary such as beheaded or blind penguins, cats, strange looking elephants...

Dizac Alexander was born in Paris. At the end of the 80’s, Alëxone discovered Graffiti Art, and at the time, he became interested in art. At the beginning of the Nineties, he sprays graffiti on subway trains and in waste grounds, which lasts two or three years. By the year 1995, he develops his calligraphic work under the name “Oedipe” which can be described as stretched calligraphies with curves and thick angles, some really minimalistics and others very dense, all painted on disused surroundings and buildings.

In the year 2000, he starts to introduce characters in his work and becomes Alëxone. It is at the sides of Jean Faucheur that he is initiated with the techniques of billboard posting. Thus, he creates works on paper intended for a precise place, which he will then stick in the streets.

He does not hesitate to use various mediums and supports: aerosol, paper, acrylic paint and resin… He integrates the collective “9éme Concept” and takes part in the itinerant exhibition “Sang Neuf ” based on diversion of the medical care sheet of the French social security.

In 2005, Alëxone carries out his first personal exhibition, at Alice Gallery, based in Brussels. In June 2006 opens his first show at the Speerstra Gallery in Paris, entitled “C’est quoi ton blaze? Je tague ass!”
He is also a member of the Belgian crew, the GM (Gentle Men), with whom he artistically continues to explore urban territories. In June 2007, he participates at an in situ wall-painting for the show “L’Art Modeste sous les Bombes” at the Auberives’ abbey.

Very colored, Alëxone creates a surrealist universe, with animals and characters, sometimes ridiculous, turning in derision today’s society. His work is meticulous, and requires a long preparation. Playing with curves and introducing calligraphy in his colored landscapes.

Even if Alëxone seems to move away from street art, he does not forget where he came from, we can thus find elements of them in his work, like his trees of which the roots finish in arrows.