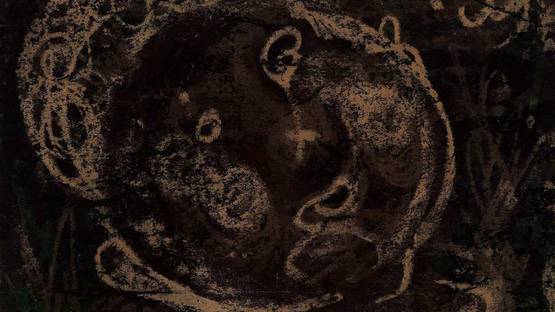 Alfonso A. Ossorio was a Filipino-American painter whose art synthesized Abstract Expressionism, Surrealism and Art Brut in different periods. These styles and the artist representing them, such as Jackson Pollock and Jean Dubuffet, influenced him greatly, shaping a course of his career.

Born in Manila, the Philippines in 1916, Ossorio attended school in England between the ages of eight and thirteen. At age fourteen, he moved to the United States, where he graduated from Harvard University and Rhode Island School of Design. He became an American citizen in 1933 and served as a medical illustrator in the United States Army during World War II.

His early works were dominated by still lifes, landscapes, and portraits executed in a visual style that the artist has characterized as “a kind of super-realism”. Influenced by Pollock and Dubuffet, his style began to morph into more abstract and overtly expressionistic work. He also became artistically fascinated with “problems which religion covers, such as birth, sex, death”. Over the years, he developed a direct and gestural manner of experimental painting filled with dense thickets of lines and splatters. A vital force within the abstract expressionist movement, he contributed significantly in both artistic and curatorial capacities.