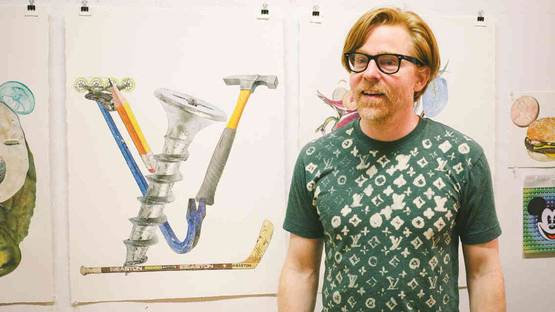 Alfred Steiner is Ohio native who grew up believing he was going to be an artist, then wound up attending Harvard Law School. Today he paints, draws and produces conceptual pieces – when he isn’t practicing copyright law for a large Manhattan law firm. “Law and art have been in most ways separate spheres for me. But there's no question that the study of law has influenced my work," he says.

When he was a student, he claims that he drew incessantly. Later, Steiner extended these doodles into more ambitious drawings, wondering how they would change if I introduced an internal compositional logic. At first, he tried geometric forms but soon started experimenting with images culled from art history, like Laocoön and his sons or Dürer’s Knight, Death and the Devil, as well as pop icons, like Bart Simpson or Scooby Doo. Through trial and error, it became clear to this artist that the stylized forms of cartoon characters were ideally suited for this work. Certain axioms emerged that he seemed to be discovering rather than inventing.

Steiner, inspired by the pull of graphics, begins by dissecting them. "I look at my source image, say the Starbucks logo, and I free-associate based on the shapes it contains. Some possibilities readily occur to me, but with others, I might draw a shape over and over, invert my sketchbook and even ask other people what a particular shape reminds them of." From there, the internet takes over. "Once I have an idea in mind, say a Greek vase for the body of the Starbucks siren, I do various image searches, looking for something that will best fit the contours of my image. Sometimes, I have to abandon an idea because I can't find a good model."

His exhibition Likelihood of Confusion refers to the nebulous law of trademark infringement, reflecting on the nature of media and advertising. Steiner reconstructs familiar graphic forms with a juxtaposition of naturalistic images, searching for a corresponding contour through a Freudian technique of free association. Using this method he recreates a likeness of logos, service marks and such, inviting the viewer to form their own opinions about the choice and combination of objects.