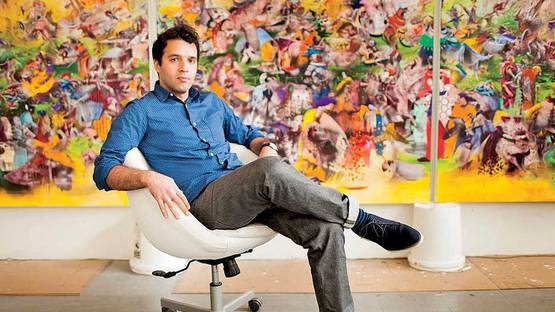 Ali Banisadr is an Iranian artist who creates astonishing large-scale paintings using his ability to express synesthesia. Giving that synesthesia is commonly referred as the ability to see sound, Banisadr manages to transfer the sound he hears using many details, symbolic references and a special blending of color. The sound he portrays is not just music, although the parts of his large works easily communicate with the audience and build a premium captivating relationship with the viewer. The sound particles are spread across the canvas inferencing the tragical noise of bombing he had to witness while growing up in Teheran.

Banisadr grew up in Teheran, where his childhood was stamped with the unfortunate experience of Iran-Iraq war and the civil war revolution. The constant noise and the fear-polluted surroundings made the inseparable connection of ruined buildings and houses with the air raid sounds. When he paints, the shrapnel of colors flies across the canvas in the same manner as the sound waves travel through our earlobes to the nervous system. His family left for Turkey, and later to San Diego, California. In the United States, he studied at the School of Visual Arts, where he graduated with BFA in 2005, and later enrolled the New York Academy of Art, earning an MFA in 2007. He was experimenting with mixed media but chose oil on canvas technique as his primary focus. The theme of his artwork is settled in an interactive method, where he lets the narrative flow unchained and open to interpretation. His paintings often require a closer look and the keynote foundation is in the details. Strong emotional background increases the overall energy of the paintings, transferring the feelings of aggression, pain, sorrow, a nostalgia for the childhood times, giving a positive sentiment even more character. The positive vibes, just like in music, bring light and harmony, that together accent the metaphysical fusion of cultures, history, and beauty of living.

Corporate Enterprise Media and the Products of War

The subjects of his paintings are small worlds, collided together in a broad universe of collective experience. Those worlds are inhabited by colorful figures struggling to find inner peace, facing chaotic consequences of war, but still communicating with each other, sharing experiences and helping each other to find a way of coping with unsustainability. The universal message is to find a way to establish methods of hopeful existence, while the circumstances are questioning the faith in humanity. He finds large canvases easier to work on since they give him needed freedom. The largest piece he made was a 7-metre long triptych, which was exhibited at Blain|Southern Gallery in London, for the first time. It was his first solo exhibition in the UK entitles At Once, and his previous solo shows were in Paris and New York. The motivation to paint in such high detail and on large surfaces was partially originated from his view on the quality of life in the 21st century. Unlike the music, where we can get stuck with one tune resonating in our heads over and over again, images come and go, as we are constantly exposed to pictures on our social media profiles, from the billboards, or in magazines. What makes one image stuck in our heads it's its ability to produce deeper thought, which will form a strong bond with the feeling we experience.

The paintings serve as a portal to many different worlds, they take the viewer to another reality where time has slowed down and the storytelling can last indefinitely. Even though there are no literal symbols exposed in his artwork, Banisadr finds a golden ration in showing instinctive references as a part of something physical. There are no clear images of birds, bombs, people, yet they are still there, their presence lingers somewhere between color fields and fragmented landscapes. No artwork of his is alike, sometimes the images give the impression as if they are magically changing when they are not in focus. It is because of his expressionist manner and ability to capture figures in motion, we get the feeling that the image is transforming right in front of us. Aside from synesthesia, Banisadr's artwork has another great quality, a therapeutical one, where he exposes his inner battles to overcome bad memories. He blends personal experience and does not separate influences of the East from the West. It is all part of his unique memorization of the past events. Same goes for the artistic influences, whether that are works of Bosch or De Kooning, Banisadr sometimes refers to them subconsciously but keeps the references and comparisons open in an indirect way.