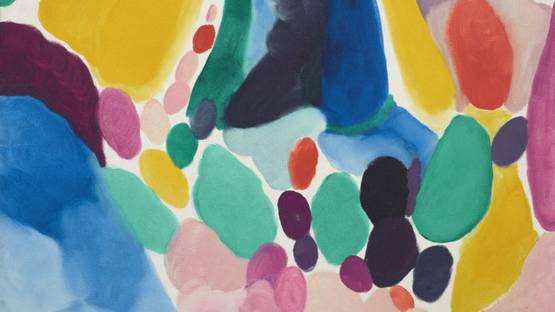 A painter, printmaker, curator, feminist and writer, Alice Baber is best known for her Abstract Expressionist paintings in watercolor and oil that explored "the infinite range of possibilities" of color and light within and from the form of the circle.

Born in Charleston Illinois, Baber began drawing at the age of eight, becoming so advanced by the age of twelve that she was enrolled in a college-level class. She attended Lindenwood College for Women in Missouri, where she spent two years before transferring to Indiana University where she studied under the figurative expressionist, Alton Pickens. She also studied briefly at the Ecole des Beaux-Arts and lived in Paris in the late 1950s and 1960s.

Working in both oil and watercolor paints, she perceived the circle as possessing an infinite range of possibilities for exploration of color and light. Color was one of main components of her art, seeking to satisfy an indulgence in what she described as "color hunger". Focusing on composition, transparency, color, and line, she aimed to depict the form of a feeling through the use of intense pigments. She was also instrumental in curating and organizing exhibitions of women artists, most notably Color, Light and Image, an international exhibition of 125 artists in 1975.