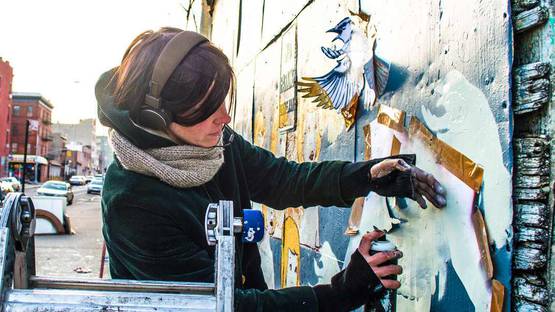 Amanda Marie is an American painter and street artist. As a self-described ‘stencilist’, she creates art inspired by illustrations and characters from mid-20th century children’s books.

Born in 1981 as Amanda Marie Ploegsma, she studied Illustration at the Rocky Mountain College of Art and Design. Since 2001, she has been living in Colorado.

Amanda Marie's fresh approach to stencil and spray paint has established her as a unique and exciting talent. Her artistic reach include small works on paper and larger works on canvas for indoor exhibitions. As a street artist, she creates stenciled large scale murals in outdoor, urban and garden settings. Using a combination of mediums and techniques, most of her paintings are mixed media with elements which are screen printed, wheat pasted, drawn and spray painted. She also works with gel transfers and acrylic paint applied by brush and splatter techniques. This complex use of multiple techniques creates an incredible depth and subtlety to her work. Other signatures of Amanda Marie’s graphic style are the frequent use of twin imagery, animals and the incorporation of vintage sewing patterns as backgrounds.

In her artworks, Marie has created a homogenized depiction of an ideal Modern American childhood. She states that her art is about ‘making something I think is fun and fun to look at - children, animals, sparkles, splatters, lines, arrows, dots...’ Main characters – a white, well-groomed boy and girl child are forever caught ungrounded and out of context, hovering in space, blasted by expressionist splatters, floating within geometric diagrams, and encountering surreal scenarios. Her stylized figures seem to have been lifted from the pages of a mid-twentieth century children’s book and have traded the protective home of childhood nostalgia for a slightly more adventurous and unsettling world, somewhere between dream and reality. Children, often with their animal companions are repeated in the image, floating carefree, emitting dazzling clouds of sparkling energy. The works recreate the freedom of childhood, reveling in the power of the imagination to invoke both the fantastic and the sinister.

Amanda’s work had been compared to the illustrations of American writer and artist Henry Joseph Darger who created a 15,145-page manuscript titled The Story of the Vivian Girls. She has also been heavily influenced by the classic golden book era illustrators such as Eloise Wilken, Tibor Gergely and Leonard Weisgard.

Her first gallery show was held in Denver in 2004. It all took off from there, with her work being featured extensively in group and solo exhibitions in the US and Europe, gaining respect from both the Street Art world and Fine Art admirers.

Amanda Marie currently lives and creates in the state of Colorado.