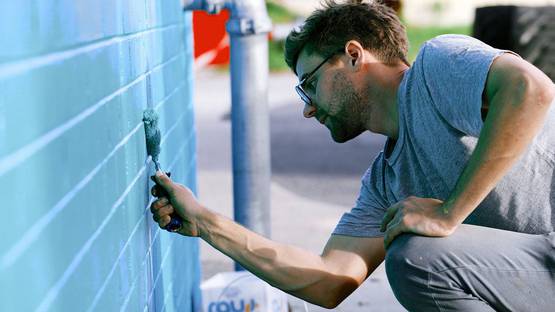 Amok Island is a Dutch artist, born in Amsterdam, in 1983. He is a self-taught, self-employed artist and designer. After growing up in Amsterdam, and spending there more than a decade painting walls, he decided to travel across the Asia, and settle in Perth in Western Australia in 2009. His passion towards underwater life can be seen in his work. In his studio in Inglewood, Western Australia, inspired by marine nature, he paints large canvases and murals, and makes screen prints hand made from start, with a technique of exposing the screens to the sun light. About his beginnings in art, Amok says: “I loved drawing, painting and making stuff as a kid, so art school seemed like the logical choice after high school. But to my surprise I did not like it at all, I hated the ‘art talking’ and I did not want to do assignments that I did not like. I figured that becoming an artist or designer was not for me. I had random jobs for a while and was unsure of what to do as a career. I was very passionate about graffiti from the age of 12, and sometimes I tried to do something nice on a canvas instead of a wall. I started to get big ideas of how I wanted an artwork on canvas to look like, but was never satisfied with my results.” It wasn’t until he moved to Australia, that he decided to really commit to art and design. In 2013, he created large concrete letter sculptures, that can be seen submerged in various marine environments around Western Australia. The slow process of marine organisms taking over was documented on film and photographs, over the course of a year in a regular intervals. On the land his super-sized murals can be seen on public walls. When asked in an interview about colleagues he admires he replied: “There are a few people doing some good stuff here, Yok and Kyle Hughes-Odgers for example, the drawings of Sean Morris make me laugh, and Fecks is doing some world class technical graffiti at the moment. It is inspirational to see how Drapht has gotten so big in Australia from doing what he loves and going for it.”

Amok Island has exhibited his work mostly at gallery spaces in Western Australia and The Netherlands, and, can also be found on the public walls in Australia, The Netherlands, Germany, Indonesia, Thailand, Greece, Egypt and Portugal. He has been commissioned to create public art murals across Western Australia, Port Hedland and New South Wales. Outside of Australia and Netherlands, his work can also be seen on walls in Indonesia, Egypt, Berlin and Portugal. In January 2014, renowned Stedelijk Museum in Amsterdam, and Kuvva featured Amok Island's work for Kuvva x Stedelijk Presents.