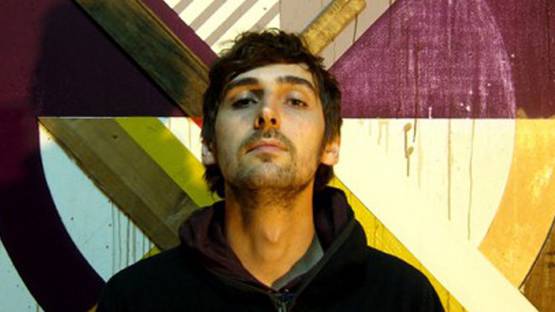 The unique use and adjustment of the human body together with geometrical shapes is something French artist Amose is famous about. The mystical feelings and vibe that artist found in South American culture are incorporated in his tribal characters. He doesn’t let his work to be limited by street walls, so he uses access to studios, and technology like computers to produce various artworks, such as screen prints, paintings, illustrations, sculptures, and graffiti. Some viewers define the theme of his pieces as running, but it is much more than that, common forms are twisted, lines are stretched, faceless people are created.

The artist was born in 1979 in Croix in the north of France. However in 1996 Amose started to learn illustration at the Institut St. Luc in Tournai in Belgium, after which he studied graphic design at the Beaux Art. During this period he got the technical base that he used more than good in his upcoming diverse artistic projects. At the same time painter’s inquisitiveness, especially in what is going around him, in artistic magazines, comics, and books make him question what art is and what it means. In 2003 by being inspired by the tribal art, made of simple shapes and graphic lines that he saw in Brazilian graffiti’s, the artist began to incorporate many flat figures and different motives into his paintings. Amose’s style reminds of Giacometti sculptures, with a note of Kandinsky paintings, finally processed with a touch of the urban influence. The impression that his prints leave are combined, to some, they have a minimalistic look, for other, they color everyday gloomy reality.

Amose’s style reminds of Giacometti sculptures, with a note of Kandinsky paintings, finally processed with a touch of the urban influence

Human Body and Face as the Central Subject

Amose likes to use body around which he builds his masterpiece. Robotic bodies and stretched lines are forms with which viewer doesn’t want to mess with. He doesn’t want his characters to look like people, to belong to one nation in particular, or to be marked as a woman or a man. The neutrality he emphasizes on faces is a result of the universality that the artist wants to achieve, by giving his paintings a sense of timelessness. The contrast and disproportionality between the face and rest of the body portray a strong movement that gives the impression of constant motion. Different mediums like screen prints, canvases, spray paint on walls, and illustrations allow him to express himself in a number of ways.

Amose is one of those persons who find freedom in sketches, in deforming and un-shaping traditional lines. His ideas that are sometimes turned into dynamic and abstract pieces are very recognizable. He has been influenced by Cobra, Ulysse 31, Enki Bilal, and many other members of the Futurism movement. He is a part of the Mercurocrom collective, alongside with Spher, Nada, Erone, and Spyre, and works in a screen print workshop called La Carpe. His artworks have been exhibited in galleries and museums in Paris, Geneva, Vienna, Antwerp, and in many other cities.

Featured image: Amose - Portrait – photo credit of the Vertical Gallery
All other images copyright of the artist; All images used for illustrative purposes only