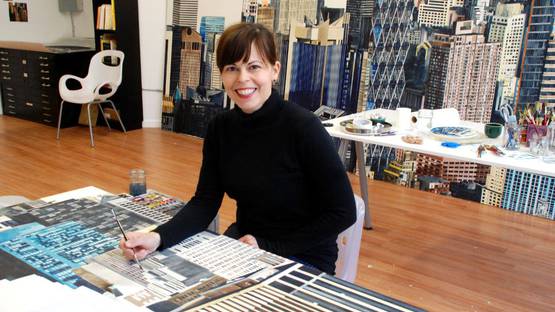 Smooth surfaces and fine geometrical shapes have occupied the fancy of Amy Park and affected her to dedicate fully to depicting architecture. Her peculiar approach to painting is embedded in focused and analytical view and expressed by watercolors. As a matter of fact, Park is a dedicated observer; she carefully examines her surrounding so each everyday situation becomes a potential inspiration. By marking the objects, the artist is not only intrigued by their flawless shape and perfect straight lines, rather she pays special attention to the composition and coloring. Interestingly, the sights she chooses to belong to the modernism, which reveals another significant layer to the narrative.

A Foray of Becoming The Artist

Amy Park was born in 1972 I was born in Warren, Ohio. In 1999 she received a BFA and an MFA in 2003 from the University of Wisconsin-Madison, and also studied at the School of the Art Institute of Chicago and Ox-Bow Summer Art School. She was a recipient of a Marie Walsh Sharpe Space Program Award in 2007-2008, and an Artist-In-Residence at the Serenbe Institute in 2012. She had several solos and participated in a large number of group exhibitions. During the years, Park’s paintings became part of permanent collections like New York Presbyterian Hospital, Microsoft Corporation and Drawing Center’s Artist Archive at the Museum of Modern Art.

Grids and straight lines seem to fascinate the artist

Behind the plain enchantment with modernist architecture in the work of Amy Park stands the rather formal occupation. The pattern of a grid was a constituting element of almost each modernist painting and led the generation of abstract artist to examine the order and the relations of elements depicted, as well as optical sensations the compositions reflected. On the same trail, Park’s approach functions, yet on the conceptual grounds, she is moving forward. The facades of buildings own some form of the mirror effect, yet they can make us wonder what is happening behinde them – what kind of lives, situations, emotions. Regardless of speculating the artist's task, the apparent ambiguity of the paintings reflects a multitude of cultural and historical references which can be read out of buildings.

The almost muselogical study in the work of Amy Park

While living in Chicago after graduate school, the artist was often exposed to a traffic jam since her then job required so. That abled her to examine the beautiful structures of Modernist architecture, from famous Chicago school of architecture to Mies Van der Rohe’s celebrated Seagram building. Park decided to take photos and soon started the first paintings of architectural facades. From that point onward, the artist devotedly analyzed the structures of those buildings by not just merely depicting them but examining their cultural value and historical significance in accordance with contemporary urban experience.

Architecture from moderinsm, over pop culture to conceptual photography

The Notable Watercolors of Amy Park

Although the overall impression of grids being laboriously constructed through repetitive pencil marks and precise watercolor strokes, it is the strategy which Park employs in order to process her concept. For her latest project Ed Ruscha’s Every Building on the Sunset Strip, the artist intersected various layers by basically reenacting the artist’s book of Ed Ruscha from 1966, who was fascinated with the architecture of Los Angeles street and captured it with his lens. Park’s decision to process that narrative from painterly perspective suggests her need to articulate the very notion of architecture from the greater social and cultural context.