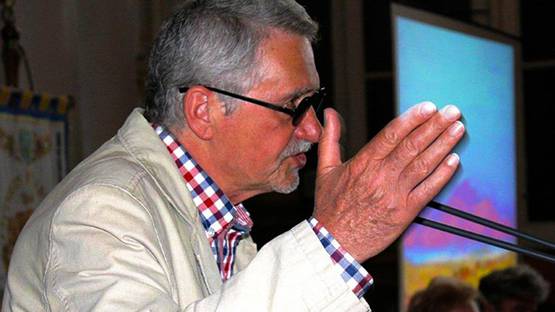 Anatoliy Kryvolap is probably the most famous Ukranian Painter. He is a philosopher with a heavy look, a living classic, who draws unique sceneries.

Anatoliy was born on September 11th in 1946 in Yahotyn, Kyiv Oblast. In 1976 he graduated from Kyiv State Institute of Arts, department of painting. Later his life became more secluded. Through years 1992 to 1995 Kryvolap was an active participant of the “Picturesque Reserve” – an influential group of artists in the modern history of the Ukrainian arts, a group that stated that liberation of the realm of paintings from all features of real life is their main objective. He is also a member of the National Union of Artists of Ukraine.

Landscapes of Anatoly Kryvolap contain emotional perfectness, the atmosphere completely opposite to the glossy and urban world. They arouse the desire to become a part of the harmonious universe, to dismiss your sign beyond the horizon.His colors cannot be confused with anything. Monochrome pictures with enormous energy, hot colors, and encrypted secrets. Here one can see the Ukrainian land – warm, fertile, and friendly; and textured spots on the horizon a moon, a boat, a man, a horse ... The artist directly appeals to the emotions, the subconscious. His work is on the verge of abstraction and figurative arts.

Since 1976 he has been regularly exhibiting at regional and international exhibitions and art fairs.Works of A. Kryvolap take part in world's most prestigious auctions. In February of 2011 his painting "Moon over the River" was sold for $ 48 492, in May "The Step" painting collected $ 98 500, and in October his "Horse. Night" got as much as $ 124 343, which hit record bid prices for Ukrainian art at Phillips de Pury & Co auctions and surely earned him the title of the most expensive Ukrainian painter as of the day. Marking the success he was announced as The Person of the Year, and in 2012 received the highest National Award of Ukraine dedicated to Taras Shevchenko in the sphere of creative arts.

Another date, which will go down in history of world’s art-market is 28 June 2013. This day at London’s Phillips Day auction his work “Horse. Evening” was sold for 186 200$ what became Kryvolp’s new absolute record. The work was introduced by European art collector who bought it in 2012 at Art Kyiv Contemporary for 80 000$.Initially, the experts have estimated this painting for 76 000 – 106 000$, what was the highest estimate of Ukrainian works during the whole period of participating of Ukrainian art in world’s art-market.