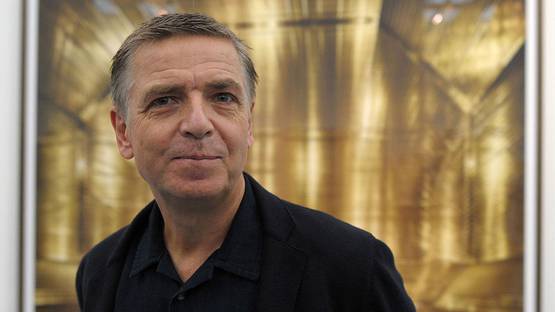 The collective bodies or constellations of objects seem to obsess Andrea Gursky pretty much so it is no wonder that those motifs became his trademark. The opaque landscapes on his photographs are at the same time alluring and freighting; those images are suggesting the states of present times, but they do possess the prophetic view on the world after tomorrow. Whether populated by humans or completely emptied, the depicted spaces do reflect the ongoing political and social turbulences.

Andreas Gursky was born in 1955 in Leipzig. Shortly after his birth, the family moved to West Germany. He studied at Folkwangschule in Essen, West Germany’s leading establishment for professional photographers. His early, unadorned compositions are heavily influenced by his years at Folkwang, where the curriculum was largely focused on the straight-shot techniques of photojournalism. Nevertheless, from 1981-1987 Gursky extended his studies at the Kunstakademie Düsseldorf. Out there the artist was under the great influences of his teachers, great conceptual photographic duo Hilla and Bernd Becher, known for their distinctive method of systematically mapping industrial machinery and architecture.

The Conceptual Take On Photography

The lessons from the Becher’s straightened his approach and Gursky started releasing a similarly methodical approach in his own large-scale photography. The other notable influence came from the British landscape photographer John Davies, whose highly detailed high vantage point images had a strong effect on the street level photographs. The curiosity is that before the 1990s the artist did not digitally manipulate his images, but then technological improvement provided him with an option of enhancing the images in regards to size and quality.

The Technical Aspects of The Work of Andreas Gursky

Despite the digitalization, the artist still shoots on a large-format film camera. The images are scanned and then painstakingly manipulated, often assembled from several photographs at once. One of the main characteristics is the perspective which is in many of Gursky’s photographs drawn from an elevated vantage point. This peculiar position is apparently part of the concept since it seems that by encompassing both center and periphery, Andreas Gursky wishes to undermine the domains of globalization.

Together with Thomas Ruff, Candida Höfer, Thomas Struth and Axel Hütte, the artist belongs to infamous Düsseldorf School. All of these artists studied at the Kunstakademie and developed authentic oeuvres based on the purified and conceptual aesthetic. With several colleagues from the school, Gursky shares a studio in Düsseldorf. A former electricity station was transformed into an artists studio and living quarters in 2001, by architects Herzog & de Meuron, who built Tate Modern. In 2010-11, the architects worked again on the building, designing a gallery in the basement.

The recurrent motif of repetition in present in Gursky's work

The World View Beyond Boundaries

Although Andreas Gursky is enchanted with his grand subjects, he also is careful in regards to reflecting the dispassionate attitude that permeates his work. The artist often uses cranes and even helicopters and pursues various legislation permissions in order to shoot peculiar sights or people regardless of complex negotiations. On famous Bahrain racetrack, the artist had to shoot patiently for two hours from different viewpoints before bringing them together to form a single composition. He is known for badgering the organizers for a consistently higher viewpoint so that he could capture the terrifying scale and precision of this vast propagandist event, which was the case while shooting in North Korea.

The electronic music for Gursky is rather important

The fascination with the daily and spontaneous choreographed movements of people in public space has often been represented on his works from the 90’s. For example, in 1992 Gursky made a shot at Charles de Gaulle depicting hurriedly people moving through the airport building. In 1995 Andreas Gursky's shoot the atmosphere of rave party during the Dance Valley festival. The ecstatic image depicts the entranced mass looking towards a DJ in smoke and lights. Interestingly, the artist is the great fan of electronic music so there are a couple of series dedicated to rave culture.

The inspiration for large-scale photographs he finds by traveling

Spaces of Affluence In The Works of Andreas Gursky

As it was already mentioned, Andreas Gursky is a hooked on representing globalization. His famous photograph 99 Cent from 1999 was taken at a 99 Cents Only store on Sunset Boulevard and its interior is depicted as a stretched horizontal composition of parallel shelves fulfilled with various goods. Whether the landfills, stock exchanges or minimal shop displays in Prada, are displayed, his images are the visual chronicle of the global capitalist machine. The artist points out that he is not interested in undermining political statement, rather he perceives his works as notes which help him to better understand the mechanism of the contemporary world.

The notable domains of Andreas Gursky to the world of photography

Over the years Andreas Gursky has exhibited his work in various solo and group exhibitions, among which the Venice Biennale (1990 and 2004), and the Biennale of Sydney (1996 and 2000) are the most important ones. A large number of notable institutions are holding his works from like Museum of Modern Art in New York and the Tate Modern in London, as well as private collections. The artist is a professor at the Kunstakademie Düsseldorf and is one of the best selling photographers in the world. Besides the fame and both academic, purely artistic and commercial success, Andreas Gursky continues to produce works in a similar manner by depicting scenes occurring in recognizable urban spaces, ranging from department stores and hotels to the German Parliament and the Chicago Board of Trade.

Featured image: Portrait of Andreas Gursky - image from WW archive
All images used are courtesy of the artist