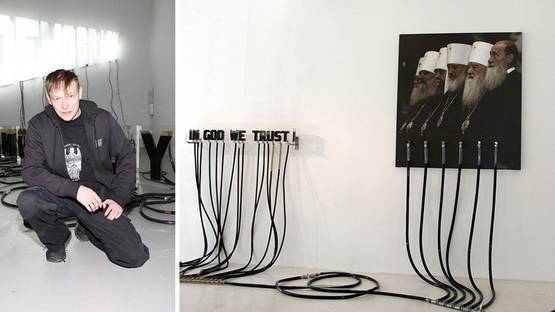 Molodkin was born in Boui, 500 km (310 mi) north of Moscow, in 1966. Both of his parents taught at the university and he went to art school at the age of 12 and was first inspired by tattoos, which at the time were illegal in Russia. Molodkin later claimed that 'the only freedom you have is what you can write on your body'. Molodkin’s visual and conceptual strategies recall some of the basic principles of Constructivist Art, the early 20th century Russian avant-garde movement, which upheld art as the domain of pure feeling and social harmony and which focused on utopian ideals, production, and process.

Molodkin pushes the boundaries of Constructivist Art by engineering clear solid constructions with hollow imprints that become active as crude oil circulates within these forms through a network of pumps and tubes. His artworks also expand the practice of Minimal Art, an unembellished, formalist late 20th century American approach to factory art-making. Like the work of the American artist Mark Lombardi who investigated international banking impropriety and theft through his art, Molodkin links crude oil to democracy, justice, liberty, and revolution as well as to icons such as the Statue of Liberty and the Winged Victory of Samothrace.

The artist has had his works featured in many individual and group exhibitions in Western and Eastern Europe and in the USA. In 2009 he represented Russia at the 53rd Venice Biennale and in 2012 the museum Villa Stuck, Munich, presented a major exhibition with his work in.
Furthermore, his works have been covered in publications such as Art Forum, Art Press, Third Text, Kh/Zh, the New York Times, the Village Voice and the Independent.

Andrei Molodkin currently lives and works in Paris and Moscow.