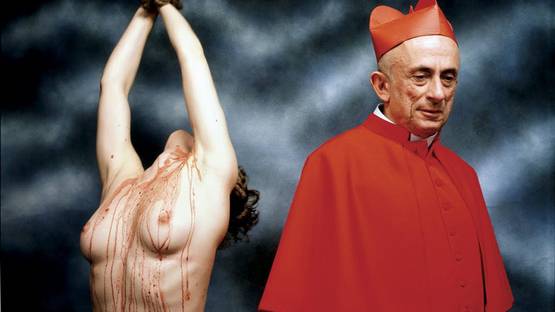 Andres Serrano is an American photographer born in 1950, whose work has been labeled from blasphemous to beautiful. He became notorious through his photos of corpses and his use of feces and bodily fluids. The impact of Serrano’s work is often derived from the contrast between its surface beauty and disturbing subject matter, presenting the ordinary in extraordinary ways.

Born in New York, Serrano is of a mixed racial background. His mother was raised in Cuba and his father was born in Honduras. Andres was raised in the Williamsburg section of Brooklyn in a Catholic household, and found his creative place at the Brooklyn Museum Art School, which he studied from 1967 to 1969. Although Serrano studied painting and sculpture, he was drawn to the medium of photography and the impulse to use a camera and film in the same manner that a painter uses brush and pigment. Working in large-scale format, Serrano creates psychologically charged and vibrant portraits, whose subject of matter are often visual traditions of the Catholic Church, represented in Surrealist style. Serrano’s other subjects are equally thought-provoking, like butchered animals, New York’s homeless, members of the Ku Klux Klan, bodies found on the coroner’s slab in the morgue, or the infinite variations on human sexuality. For his series of images called Nomads, Andres went into the New York City Subway with lights and photographic background paper to portray the bedraggled homeless. His artistic response to the 9/11 tragedy was to create a series of 100 portraits of citizens who embody the spirit of America. Ordinary citizens of diverse occupations and from all walks of life are shot against painted backgrounds, making astonishingly direct and honest portraits of real people representing both themselves and their humanity.

For this eccentric artist, the primary function of art is to provoke immediate and powerful responses. The most famous and notorious of Serrano's work plays on the relationship between beautiful imagery and vulgar materials, his subject matter often drawing from the potentially controversial and the willfully provocative. Many of Serrano's pictures involve bodily fluids in some way—depicting, for example, blood, semen or human female milk. Within this series are a number of works in which objects are submerged in bodily fluids. Most famous of these is Piss Christ made in 1987, a luminous photograph of a crucifix submerged in the artist's own urine. Causing great controversy when first exhibited, this work became a polarizing symbol, igniting a nation-wide debate on artistic freedom and expression. The work was sold for $277,000 in 1999, far beyond the estimated $20,000 – $30,000.

Andres Serrano has held over 100 solo exhibitions in galleries and museums from Iceland to Australia. His photographic works are in the permanent collections of museums in eight countries, including the Whitney Museum of American Art in New York, the National Gallery of Australia, the Institute of Contemporary Art in Amsterdam, and the Museo Nacional Centro de Arte Reina Sofia in Madrid.
The artist lives and works in New York City.