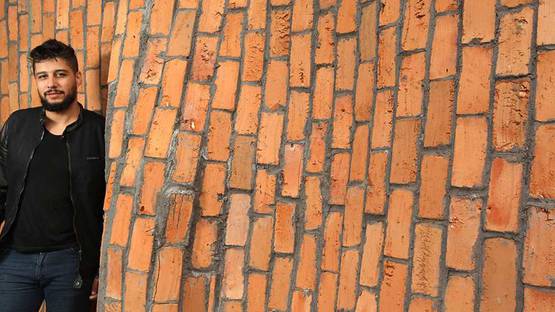 Andrey Zignnatto explores the ideas of time and place in a physical world in which man coexists with nature. Being surrounded by nature-given objects, man shapes the space around him with artificial objects that bring geometry and proportion to the visible world. First comes the idea, then the realization, and between those two phases came the intention, the projection, and the vision. Zignnatto investigates the origin of material and how it can be manipulated in the process of creation. Choosing large-scale sculptures and installations, he escapes the claustrophobic restriction of the studio and photographs them in their non-natural habitat.

Finding Balance in Coexistence with the Nature

The artist searches for the architectural soul of the brick. This constitutive element was made by man, and the clay was made by nature. Everything has its own maker, and the space that we share with the natural world has been constantly reshaped by both natural and artificial forces. The key to finding balance in this coexistence lies in mindfulness. Being fully aware of every step in the creation process, Zignnatto takes into account the brick and ceramics factories, how the manual and industrial labor affects the workers, what bricks can be used for and how our constructions fabricate the reality. The brick a symbol of possibility and the artist insists that it should not be reduced to just one property.

Everything has its own maker, and the space that we share with the natural world has been constantly reshaped

Exposing the Aesthetic Place of Creation

Andrey Zignnatto was born in Sao Paolo. He is a self-taught artist. He worked as a teacher at Association of Plastic Artists of Jundiaí from 1999 to 2001, where he previously attended several workshops and courses. He is a president and founder of the Menorah Cultural Association. Each of Zignnatto's pieces has been installed with consideration of the events that occurred previously. For example, when he photographs his installation, there is a need to show how the bricks were made in factories and how they fit into his sculpture. All of these occurrences are interlinked together, and the artist feels obliged to show that there was the aesthetic place of creation, before his work came to the aesthetic space of formation.

A collection of bricks is a landscape in space, and Andrey Zignnatto experiments with material possibilities to extract different ideas from the production. He made his studio inside the pottery shop and inspired by daily communication with workers, he made his Territórios Forjados project in which he showed the geometric appeal of all the city architecture. His goal was to induce the wonder and speculation in the viewer, so everyone could become mindful of the cities they live. Human beings are reshaping the physical world in order to live more comfortably, but unlike nature, they induce evolution much faster. The result is a social and cultural revolution that reconstructs the world.

The artist is represented by Fabien Castanier Gallery

All images used for illustrative purpose only © Andrey Zignnatto