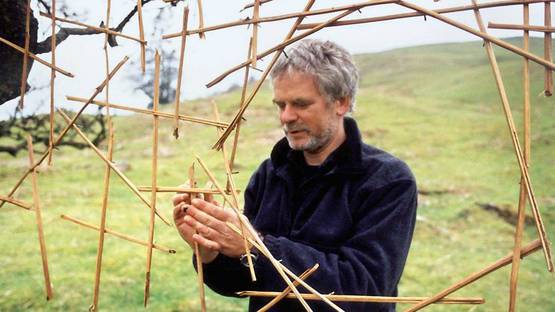 Using the temporal materials as the reflection of the world we live in, Andy Goldsworthy collaborates with nature creating ephemeral works which remain immortalized only on photographs. Traveling around the world in a quest for perfect environment, he strives to understand nature by his direct participation, enjoying the freedom provided by the possibility to create something just using his hands and material that is within reach. His outdoor sculptures of snow, ice, leaves, rock, clay, feather and twigs represent the idea of change, movement, growth, and decay that are the vitality of nature, the driving energy that he tries to elicit through his pieces. Using the earth as a source, he makes art sensitive as every process that happens around us. Nature and land are in a state of change which itself is the key to understanding.

Goldsworthy was born in 1956 in Cheshire as the son of F. Allin Goldsworthy, professor of applied mathematics at the University of Leeds. Growing up on the Harrogate side of Leeds in the West Riding of Yorkshire, in a house ending the green belt and working on farms since the age of 13, he was obviously influenced with the repetitive routine of farm tasks that is widely applied in his creative approach. He has studied fine art at Bradford College of Art and later received Bachelor of Arts at the University of Central Lancashire. Always disliking work indoors, he found his escape nearby Morecambe Bay where he has created his first temporary structures collapsed under a flood tide. He very soon realized that his artistic interests were closely connected to his rural childhood than to classes and studio surroundings. Instead of representing the landscape, he used it as a “canvas”, representing the works of transcendent beauty. The artist often changed his place of residence and in a quest for the perfect environment he traveled all around the world making sculptures, besides at England and Scotland, at the North Pole, in Japan, the Australian Outback, in the United States and many other countries. Taking the opportunity each kind of day weather offers, he always strives to take the best of it finding the satisfaction in a freedom of expression. But he goes under the surface and the leaves, rocks or branches are not the pure materials, but represents the life in and around them. Because of the transient nature of his work, photography has the main role in providing evidence and an access to a wider viewing public. “Each work grows, stays decays – integral parts of a cycle which the photograph shows at its heights, marking the moment when the work is most alive. There is an intensity about a work at its peak that I hope is expressed in the image. Process and decay are implicit.”[1]

Through the camera, he is able to manipulate color, light, perspective, and other effects, taking the work out of its natural surroundings. Also considered the pioneer of modern rock balancing, he doesn’t use any tools but his bare hands, teeth and found help on the site. Still, creating the permanent pieces, such as Roof, Stone River, Moonlight Path or Chalk Stones he sometimes has to employ machine tools. Whether permanent or ephemeral, the main characteristic and the essence of his creations is the concern about the relationship of people and the world around them. “My approach to larger, more permanent work is longer-term. There is a process of familiarization with the site through drawings that explore the location and space. This is the only time I use drawing to work through ideas; for me, it represents a change in approach. I often live with a site at the back of my mind for months, sometimes years--a target for energies and ideas. By working large, I am not trying to dominate nature. If people feel small in relation to a work, they should not assume that there is an intention to make nature itself small. If anything, I am giving nature a more powerful presence in the mass of earth, rock, wood that I use. I do not change the underlying processes of growth, and nature's grip is tightened on the site that I have worked”[2]. His art influences the people to question how life affects and is affected by ecological systems and cultural conditions. Considering humans an integral part of nature, Goldsworthy encourages and intrigues all five senses to feel and look closer at the surroundings.

During the winter of 1988/89, along with the group of assistants, Goldsworthy created eighteen monumental Snowballs displayed in the Old Museum of Transport in Glasgow where they remained five days, gradually melting which was documented through the series of photographs and performances. One more example of his documentation of ephemeral change is the Ballet Atlantique, a performance that diverts the attention of the passing of time. Series of photographs recorded the transit of sticks thrown into the air. This is in accordance with his beliefs that the intensity of gestural act of creation exists only for a moment, followed by the process of generation, regeneration, and decay. One of his foremost works, his first museum commission for a permanent piece in the United States, but also the largest single installation to date, Storm King Wall, reflects his nature-based methodology through this dry stone walls, originated from the British agricultural tradition. Imagined as a 750-foot-long wall meandering through the wood to the large oak tree, it finally reached the nearby lake downhill. After some time, the wall was extended again, emerging on the other shore, continuing uphill to Storm King’s western boundary at the New York State Thruway, making the total of 2,278 feet. Up to five feet high, built stone-by-stone of the remains of an old farm wall found in the woods, the line follows the path that artist himself chose, partially coinciding with the old one. Designed and supervised by Goldsworthy, the construction was built by a team of stonemasons, shaping each piece and placing on top of the another with no concrete or any bonding material. In 2010, on the fifteenth anniversary, the artist and his team returned to construct Five Men, Seventeen Days, Fifteen Boulders, One Wall in a nearby field that Goldsworthy memorized upon his last visit. Working for seventeen days, they lifted the 309-foot long wall using the 250 tons of stones, evoking the ancient ruins. In 2005, he produced another commissioned work for the entry courtyard of San Francisco’s De Young Museum called Drawn Stone. The artwork represents an embodiment of the situation with frequent earthquakes and their consequences that affect this city. Consisted of a giant crack in the pavement that broke off into smaller cracks, and broken limestone that could be used as a bench, the artist used the hammer to convey the effect of the cracks.

Not seeing himself as a designer of his works, the artist thinks that designing something implies forethought and plan that should be followed. But, his pieces grow gradually and without any expectations, layer by layer, rock by rock, leaf by leaf, completely unpredictable. Sometimes work collapses, once of more times, but that act of building and rebuilding itself becomes the part of an art piece because the failure is very important in both art and life. “To achieve what I want, to achieve the works that I make, I have to be fully committed to them succeeding. I couldn't make them otherwise. And you cannot feel that commitment without feeling or having a deep sense of loss when they do collapse or fail, and that's inevitable.”[3] One of the interesting outdoor works is his rain shadows, the artist’s imprints on the ground when it’s raining. Although sounds simple, this complicated process requires much patient – sometimes it stops raining when he’s half-way through and in some cases he just has to lay down for hours waiting for the shower. With the aim of understanding the atmospheric precipitation, during the time, Goldsworthy learned everything about the rain, recognizing its different rhythm and kinds. Enjoying the cold weather, there are rare freezing winters during the last years, so the artist uses every opportunity to exploit ice. Often, his work in ice is only a reflection of the things he did in stone, so he claims that one can learn much about the stone by working with ice and vice versa. The hard side of the work with this material is the fact that temperature rarely stays below freezing all day long in Britain, so he must work on dark and very quickly before the temperature starts to rise and the piece collapses.

The artist believes that the intensity of gestural act of creation exists only for a moment, followed by the process of generation, regeneration, and decay

Exhibitions and Achievements Worthy of the Film Story

From the beginning of his career, Andy Goldsworthy rejected the traditional idea of the artistic studio, working exclusively outdoors. From 1976 until 1984, he has been creating only ephemeral works in natural environments captured by the camera. His more recent work consists of mostly permanent installations that he calls “a living part of the landscape”. Goldsworthy has produced more than seventy exhibitions and projects all over the world including those in the Canadian Arctic, Digne, France, the streets of London, and Tochigi Prefecture, Japan. At the same time, he has made temporary museum installations at the J. Paul Getty Museum, Los Angeles (1997), The Metropolitan Museum of Art (2004), New York, and The Tate, Liverpool (2004), among others. Goldsworthy's other large-scale installations in the United States include Garden of Stones (2003, Museum of Jewish Heritage, New York), Three Cairns (2001-2003, Des Moines Art Center, Iowa), Neuberger Cairn (2001, Neuberger Museum of Art, Purchase, New York), West Coast Cairn (2002, Museum of Contemporary Art, San Diego), Stone River (2001, Stanford University, Palo Alto, California), and Storm King Wall (1999, Storm King Art Center, Mountainville, New York). All of these large-scale commissioned works have their origins in ephemeral works[4]. Andy Goldsworthy is the subject of a 2001 documentary feature film called Rivers and Tides, directed by Thomas Riedelsheimer.