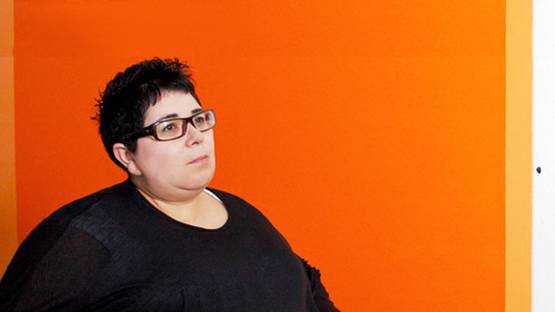 Angela de la Cruz is a Spanish artist whose works sit between painting and sculpture. She engages with the discourse about the ‘problem’ with painting by targeting its basic anatomy: the stretcher, normally left to its job of keeping the canvas smooth and pliant. Angela de la Cruz was born in La Coruña in Galicia, northwest Spain in 1965 and lives and works in London. She received a BA in philosophy from the University of Santiago de Compostela (1989) before moving to London, where she has a BA in Fine Art from Goldsmiths College (1994) and an MA Sculpture and Critical Theory from the Slade (1996).

De la Cruz breaks convention, quite literally, by mangling the stretcher and piercing the flat edifice of the canvas to unleash it into three-dimensional space. Slashed, twisted and reformed into something approaching sculpture, there is a dark humor at play: “The moment I cut through the canvas I get rid of the grandiosity of painting”, she says. Convention punctured, her works seem to mimic aspects of human behavior or states of mind – cowering, cringing, surviving – and, more recently, this sense of human scale has been bolstered by works incorporating items of domestic furniture, such as chairs and tables. Prostrate on the floor or hanging on the wall like macabre trophies, they are evidence of a violent process and, as such, confront it as something thrilling, fearsome and, whether soiled or slick, just beneath the surface. For recent works such as Burst (White)(illustrated right, 2012), the artist has violently yet playfully transcended the imposed boundaries of her medium, asserting painting’s three-dimensionality by causing the sides to burst as if about to tear or explode. “These works are about being on the verge of something, the liminal state between one form and another. There is a surface appearance and there is also what lies beneath. These pieces are quite aggressive but they are also in a calm state.”