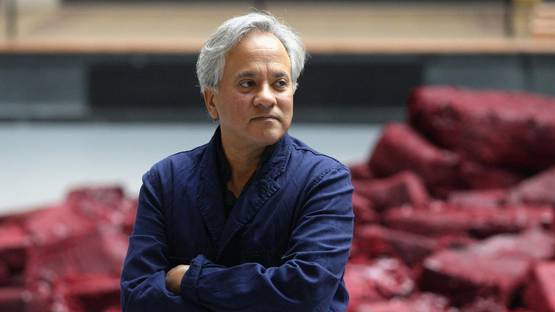 Creating brave and adventures sculptural forms, Anish Kapoor is regarded as one of the most influential sculptors of his generation. Maneuvering between various scales of works, different materials and spaces, his concave or convex mirrors swallow the viewers and recesses carved in stone and often pigmented seem as to disappear. Kapoor is a best known for his powerful site-specific works whose protrusions and voids can be interpreted as metaphysical polarities of presence and absence. The forms flow with no interruption, turning themselves inside out and the surfaces are not painted but impregnated with color.

Kapoor was born in Bombay in 1954. He moved to London in 1970’s to study at Hoesney College of Art and Chelsea School of Art where he earned his master degree. His work has been shown in numerous solo and group exhibitions worldwide. Kapoor won the Turner Prize in 1991, a year after he represented Britain at the Venice Biennale, and honorary fellowships from the London Institute and Leeds University (1997), the University of Wolverhampton (1999) and the Royal Institute of British Architecture (2001). He was also awarded a CBE in 2003 and a Knighthood in 2013 for services to visual arts and received an honorary doctorate from the University of Oxford in 1994.

The beginnings of his career during the 80’s marked the use of natural materials as marble, granite, limestone, pigment and plaster and abstract forms with minimalistic concept characteristic by rich color and optical effect of depth. In the late 80’s and early 90’s his explorations of the matter and non-matter took him to the works that seem to recede into the distance, disappear through the walls or floors or on some other way question the idea of physical presence. In 1987, Kapoor started to exploit the stone which he later used for play with dualities like earth-sky, lightness-darkness, visible-invisible, body-mind. Eight years later, he became interested in the highly reflective surface of the polished stainless steel. Reflecting and distorting its surroundings, these mirror-like sculptures delve further into the realm of manipulations of form and space. The critic welcomed his Cloud Gate, an 110-ton piece of art created for Chicago’s Millennium Park in 2006, so as Sky Mirror, a 35-foot-diameter concave mirror placed ae Rockefeller Center in New York the same year.

At the beginning of his career Kapoor used natural materials

Due to his outstanding work and activities within the community, no one was too surprised that Anish Kapoor was named the 2017 Genesis Prize winner. As we've already grown accustomed to by now, The Genesis Prize Foundation yearly honors individuals who have achieved distinction in their chosen profession and demonstrated dedication to the Jewish community. Kapoor found himself at the receiving end of such a prestigious reward for his Holocaust Memorial for the Liberal Jewish Synagogue in London and the 70 candles for Holocaust Memorial Day in Britain in 2015 that commemorated the 70th anniversary of the liberation of Auschwitz. The 2017 Genesis Prize now serves the role of a creative crown to Kapoor who certainly holds this reward close to heart despite the fact he accepted so many prizes for his art during the course of his career. During the annunciation of the winner, The Genesis Prize Foundation acknowledged Kapoor as one of the most influential and innovative artists of his generation.

An Artist, Not a Politician

Staying true to his personality and previous decisions, Kapoor made a choice to donate the $1 million award - as is the custom for this prize - to organizations that will help alleviate the refugee crisis and try to expand the Jewish community’s engagement in a global effort to aid Syrian refugees. Anish explained such a decision with the following statement: As inheritors and carriers of Jewish values, it is unseemly, therefore, for us to ignore the plight of people who are persecuted, who have lost everything and had to flee as refugees in mortal danger. Outsider consciousness resides at the heart of Jewish identity and this is what motivates me, while accepting the honor of the Genesis Prize, to re-gift the proceeds to refugee causes. He also noted that he is an artist and not a politician, a fact that obliges him to speak out against indifference for the suffering of others.

During the time, Kapoor’s work more and more blurs the boundaries between the architecture, design and sculpture. Originally left India to become an engineer as his father, he became seriously interested in art and gave up his intentions. That proved to be a good life choice, considering the fact that he has become one of the best-known contemporary sculptors in the world. His art pieces can be found in several major cities on the planet and also in collection worldwide, notably at the Museum of Modern Art in New York, the Tate Modern in London and the Guggenheim Museum in Bilbao.

This artist is represented by Scai the Bathhouse, Tokyo, We Are Partners, Paris and Weng Contemporary, Zug.

Featured image: Anish Kapoor - Photo of the artist - Image via Adam Berry
All images used for illustrative purposes only.