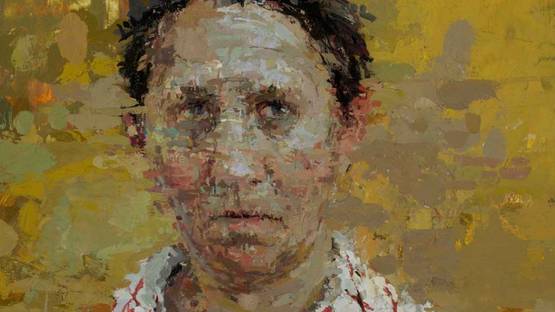 Ann Gale is an artist best known for her figurative portraits composed of accumulations of numerous, detailed color patches that powerfully express the changes in light and the movement of the human figure in time. Her fragmented psychologically-charged paintings portray both the physique of her models but also the passage of time visible to the viewers in the accumulation of brushstrokes. And though oil paintings on canvas, seem to be her favorite the artist also works with other media such as linen-wrapped panel, copper, graphite, and paper.

Unique Viewing of the Human Figure

Ann Galle is an American figurative painter born in 1966. She earned her BFA from Rhode Island College and her MFA from Yale University. The artist is influenced by great figurative painters' technique including the skills of Lucian Freud and Alberto Giacometti. The artist uses live models to create her stunning but time-consuming work. The artistic process is lengthy and consists of a series of three-hour long sessions executed in the time period that can last from four months to two years. The abundance of time she spends with her models adds a psychological note to her art pieces as the physical discomfort caused by the long sitting sessions results in a profound emotional exposure and a strong sense of intimacy.

An Artist Interested in Portraying Tension and Psychological Depth

Though located in the center of her work the models are not the only and not even the most important part of Ann Gale's art. The painter's oil on canvas art pieces deal with the relationship of the surrounding light and structure just as much as with portraying the psychological state of her models. By capturing the change of light and the atmosphere of her sitter's surroundings the artist portrays what she likes to call the "color environment", thus creating the vivid background that seems to subsequently approaches and moves away from her sitters.

Even before she starts painting the artist spends hours and hours carefully observing and getting to know her models. At first, Ann Gale used her family and friends as models for her works, but in recent years she began working with professionals that each contain certain qualities that captured the artist's attention. Ann Gale carefully carves the figure of her subject out of negative space often highlighting some part of the body while carefully hiding others. The technique that builds people out of the particles and patches of oil paint remind the viewers of the fact that, on a molecular level we are all made from particles and motion of energy. Ann Gale works as a Professor of painting and drawing at the University of Washington since 1995. Her drawings and oil on canvas works have been on view at numerous galleries and art venues including Portland Art Museum, 2007, Jacob Lawrence Gallery at University of Washington, 2016 and Fralin Museum of Art in 2016.

She is represented by Dolby Chadwick Gallery, San Francisco, USA.