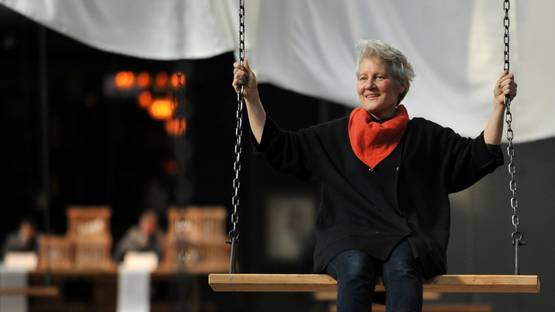 Living in the time of technology advanced generations who negate the human presence, there is a question that reconsiders the existence of one’s individuality. Does the artistic creation have a function in the understanding and recognition of the embodied knowledge and which places are convenient for face-to-face meetings and live experiences in the digital world? Ann Hamilton puts these issues in the focus of her site responsive installations over the last 20 years. With the viewer’s movement in time and space as the central component of the work, her creative process is always changing. Begin with the relations of touch, motion, cloth and sound, Hamilton’s work now put the accent on the less material acts of reading, speaking and listening.

Touch is the Common Sense

With the use of time as material and process, her creative methods represent the invocation of place, collective voice, connection of the past and presence. The ephemeral environments create experiences that evoke the architectural presence with its social history behind. Involving the written and the spoken word, the primary projections begins with mouth and hand, as the metaphoric center of her installations. In The Common Sense, The Animals, 2014-2015, Hamilton explores the sense of touch, the common one for all animal species. Every extension of a hand or a paw is toward the contact and touch is something that leads us from observation to participation. Hamilton thinks that every exhibition must be a form of exchange between the art piece and the audience. Everything is changed by each person who enters into space.

The textile is always present in her art

Issues of Slavery in Venice Biennale

As a child, Ann Hamilton entertained herself with sewing, needlework and embroidery and it was a natural path to study textile design at the University of Kansas. She received her MFA in sculpture from the Yale School of Art. She was a teacher on the faculty of the University of California at Santa Barbara, and since 2001, Hamilton works as a Distinguished University Professor in the Department of Art on the faculty of the Ohio State University. She received numerous honors and recognitions and her work participated in the representation of the United States in the 1991 Sao Paolo Bienal and 1999 Venice Biennale, where she has reviewed the issues of slavery and oppression in American society with the installation that included walls covered with Braille with red powder sliding down, literary making the language visible.

The Event of a Thread

Combining the ephemeral presence of time with the material tactility, Hamilton’s The Event of a Thread is made of many crossing of the near and the far away. A body crossing space, a voice crossing the room in the paper bag, writer’s hand crossing the sheet of paper, listening crossing with speaking, this work draws together sounds, and live events with fields of swings, that invites the visitors to connect themselves with the work and participate in the action. In the middle of a great hall is a giant white cloth and in front and behind of it is a field of swings hung 70 feet from arched iron carriers. There are the readers, seated at the wooden table, reading out loud to the birds and in one corner is a writer, who responds to the conditions in the room. This condition reveals the social act of our crossing with emotions, sounds and textures, asserting that all making is an act of attention and attention is an act of recognition.

The photographs are made with the small pinhole camera

Mouth or Hand as a Sense of Sight

Every installation is accompanied by the ongoing body of smaller works. Dealing with the different materials, Hamilton creates objects, videos and prints as bodies of her work and parts of the process. They are made as components of architecturally bounded, sculptural projects. Some of them were primarily the part of installations but later recognized as independent objects. As Hamilton says, they have their own resonance. There is another type of objects, created as the pieces themselves. In her practice of making innovations, she made a two important changes in creating of photography and video. Using the small pinhole camera made of a plastic film canister and held in her mouth to take a picture, records the time of two people extends into the moment of exposure. Moving the hand over the photograph, these subjects becoming dimensional in time. Hamilton replaces the sensory organs, the mouth or the hand serves as an eye.

Every art work has its own resonance

I am a Maker

Exploring the way that bodily and linguistic experiences forms perceptions and knowledge, Ann Hamilton reveals the sense of touch as the main medium of cognition. Her interests include the written word, history and social issues. In her creations, she connects sculptural and architectural elements with photography, video and sound, implementing textile design into these multimedia installations. Preferring the term maker, instead of the artist, Hamilton creates comprehensive artworks which insist on active presence of the audience. Responsive to the occurrences of the places where they are made, Hamilton’s artworks include the viewers in a poetic way.

Featured image: photo via onbeing.org
All images courtesy of the artist