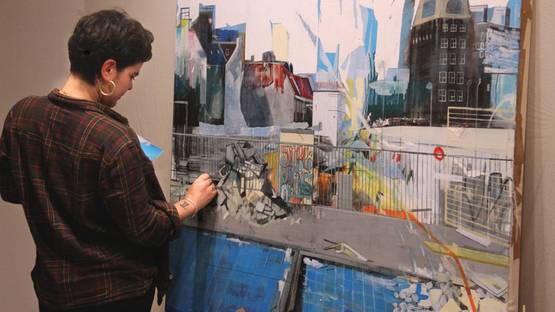 Anna Capolupo is a highly talented Italian artist known for her paintings loaded with incredible energy with a very original style and technique. Capolupo draws inspiration from the urban landscape and industrial suburb of the cities creating a world of factories, construction sites, lumber yards, garbage dumps, and railway routes. In her paintings, the objects are overlapping one another, creating a dynamic composition that draws the observer’s eye in and around the piece. Combining acrylic paints, tempera, chalk and graphite on rough paper sheets, the artist enhances the tactile quality of her paintings and drawings.

The Art of Anna Capolupo

By tracing the skeleton of the suburbs on paper, Capolupo revives the old world of the outskirts through luminous and intense lashings of color. The artist defines these urban fields as non-places in every city but belonging to none. Losing their referential meaning, these images become the transient memory trace of a living being, inhabiting the rough architecture of the city landscape. As in the Nude series, the details of a vision get dispelled into the evocation of a remembered atmosphere.

The “No” Places by Capolupo

Capolupo’s work has been included in individual and collective exhibitions throughout Italy. In the Summer of 2014, she presented her most famous series of paintings, inspired by “No” places, at Burning Giraffe Art Gallery in Torino. Entitled Torino Nowhere. Inconscio Metropolitano V.1, the show explored the theme of degradation, underlying the melancholic atmosphere that permeates the whole world. Berlin Nowhere. Metropolitan Subconscious vol. 2 was the second solo show by young Italian painter in the exhibition space located in Via Eusebio Bava 8/a. The artist traced a journey through the urban outskirts of Torino and Berlin depicting those architectonic spaces which are treated without any sort of romantic transfiguration, but capturing their past functions and future possibilities.

She often explores the theme of degradation, underlying the melancholic atmosphere that
permeates the whole world

Revealing Hidden Personalities of the Cities

Born in Lamezia Terme, a small city in the province of Catanzaro in the Calabria region of Italy, in 1983, Anna Capolupo obtained her degree in painting from the Academy of Fine Arts of Florence in 2009. She won the International Art Prize Limen 2015. Recently, she had her first solo show in a public art institution, the MACA - Museum of Contemporary Art Acri. During the past several years, Capolupo developed a unique technique of painting urban landscapes with an expressiveness and drama that puts the cities’ hidden personality on display making it hard to take your eyes off these works.

Anna Capolupo lives and works between Turin and Florence.