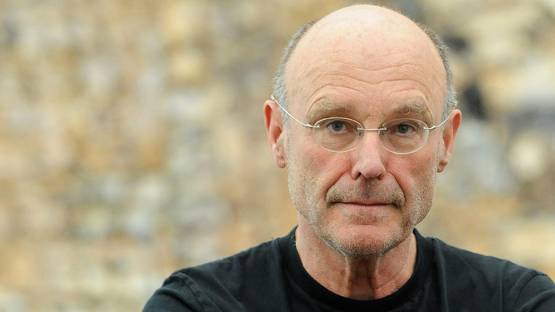 Dealing with the themes of German history and national identity, Norse myth, Kabbalah and Egyptian gods, Anselm Kiefer chooses to work in a complex personal cosmology creating pieces that incorporate heavy impasto and unusual materials, such as lead, dried flowers, strands of hay or glass shards emphasizing their symbolical potency. Particularly indicating the idea of Holocaust and Nazi period, his works often caused controversy. The main influences came from his contemporaries Joseph Beuys and Georg Baselitz, postwar tendencies in Abstract Expressionism and Conceptual art, but Kiefer is most regarded as an exponent of the Neo-Expressionism derived from Minimalism and abstraction, advocating representational and symbolic visual language. His imagery incorporates sigils, occult icons, both landscapes and architectural interiors, making direct references to the German past with the aim of provoking the emotional and psychological reaction of the viewer. Interested in knowledge, Kiefer often uses literature, implementing text into paintings, like verses from the poems, lines from novels and nationalist slogans or seminal names written in a scrawling script.

Kiefer was born in 1945 in Danaueschingen, couple of months before the end of the World War II. His family moved to Ottersdorf where he finished high school and entered the University of Freiburg where he studied Law and Romance languages. As a son of an art teacher, Kiefer early showed an interest in art. Growing up in a Catholic home in the picturesque surroundings of the Black Forest near the eastern bank of the Rhine, these environments probably played an important formative role in his later artistic development, providing imagery for his work. Changing the Romance language and Law studies for art, Kiefer moved first in Freiburg, then Karlsruhe and later Dusseldorf attending the Art Academies. As a part of the postwar generation that felt the shame of the Holocaust and Nazi’s misdeeds, the lack of discussion about this themes in school encouraged him to show his thoughts through his creative expression. Beginning with the photography and performances, his first project occurred in France, Switzerland, and Italy where he, in paramilitary costume imitated the Nazi salute, addressing the Germans to remember and question the losses which were the result of the xenophobia of the Third Reich. These photographs were collected in the series Occupations which were the subject of his first solo exhibition held in 1969 at Galerie am Kaiserplatz in Karlsruhe, causing the controversy because of the content cluttered with the political past. In 1970, Kiefer moved to Dusseldorf to study at the Staatliche Kunstakademie where he met artist Joseph Beuys, his mentor and teacher who made the crucial influence on him. Enthusiastic about Anselm Kiefer’s ironical references to German history, Beuys saw the great potential in the young artist, encouraging him to explore painting[1]. His first large landscape painting emerged in 1971, representing the beginnings of his later distinctive visual language. Remaining focused on the same themes, Kiefer started to work with glass, wood, straw and plant parts as the reminiscence of their transience and fragility. During this period, Anselm Kiefer met painter Georg Baselitz who became his patron and someone whom he would collaborate with for a long time. He encouraged him to continue to work on his seminal early series of a provocative subject matter by purchasing some of his paintings.

Traveling to Europe, the United States, and the Middle East, Anselm Kiefer has expanded his views, discovering new interests in mythology and religion, starting to implement motifs of Jewish mysticism and Egyptian hieroglyphic symbolism into his works and embracing sculpture and woodcuts beside painting and photography[2]. The 1980’s were characterized by his use of new materials with ephemeral qualities, such as flowers, straw, or ash while early exploited lead became more dominant, due to his purchase of the lead roof from a Cologne cathedral when the replacement was done. In accordance with the rise of Neo-Expressionism, Kiefer gained international fame and in 1980, along with Baselitz, represented Germany at the Venice Biennale. It was a very important decision that confirmed this movement and forced the country to accept the themes of recent history in artistic dialogue. Series of paintings emerged between 1980 and 1983 represented stone constructions as a pictorial support to famous examples of National Socialist architecture designed by Albert Speer and Wilhelm Kreis. Moving his focus toward more general subject matter in the terms of the whole civilization, his work simultaneously became more sculptural and imbued with mysticism and theology. During the 1990’s he has been completely devoted to the exploration of the deeper meaning of life and the universal myth of existence which was followed by a cycle of monumental paintings of the cosmos. In the meantime, the artist moved from the small town near Frankfurt to Bajrac in France where he built a studio in an abandoned silk factory, successively transforming the space into a Gesamtkunstwerk, with tunnels, towers, and buildings. From 2002, he once again adopted a new material, this time concrete, creating the series based on the Russian Futurist poet Velimir Chlebnikov, inventor of the “language of the future” called “Zaum” and also reviving the use of writings of the Romanian poet Paul Celan who was present in his earlier oeuvre[3]. His great exhibition Velimir Chlebnikov held in 2006, consisted of thirty monumental paintings hanged in two inclinations of a corrugated steel building, resembling the studio in which they were created.

His first body of work, Occupations (1969), Kiefer created series of self-portraits, photographing himself faced with the history of Nazi Germany. Saluting in his father’s uniform, he took the pictures in different politically significant locations in Switzerland, Italy, and France, like national monuments and ancient ruins. Inspired by the painting Wanderer Above the Sea of Fog (1818) by the German artist David Caspar Friedrich, Kiefer’s human figure dominates the landscape connecting two periods of German history, the imperialist ideas of the early 19th century manipulated by the Third Reich that lead to the Holocaust. This work was faced with the negative criticism of his colleagues and a wider public.

Shevirat Ha-Kelim or Breaking of the Vessels (1990) is his sculptural work, inspired by Kabbalah, Jewish mystical writings that describe the attributes of God as divided among ten vessels that were too weak to support them. When they broke, only the virtues of Will, Wisdom and Understanding remained and the others left out into the world outside God’s control. Symbolizing the introduction of evil and the human condition into the world, the sculpture is a 17-foot-tall bookshelf loaded with 41 oversized different books decorated with the broken glass and the spirit of the God above represented with the inscription Ain-Sof which means the infinite on Hebrew. The ten vessels of the divine essence are in the form of the lead markers attached to the shelf. Resolving the multiple meanings of this sculptural piece, it could be a metaphor for the human tragedy and the cycle of rebirth, but also indicates the strength of the Jewish tradition that has been threatened throughout history.

This work is a metaphor for the human tragedy and the cycle of rebirth, but also indicates the strength of the Jewish tradition that has been threatened throughout history

Appearing as an exponent of the Neo-Expressionism when the painting was considered to be overdated medium, Kiefer brought the innovative point of view by using the materials partially borrowed from Robert Rauschenberg’s combines and unconventionality of Art Brut and Arte Povera in a combination with symbolism and mysticism, deeply imbued with historical references. His approach revived the interest in three-dimensional, multi-layered canvases, inspiring future generations of artists to adopt and freely experiment with new materials. What at the first glance seemed like simple landscape, actually was a very complex depiction of morbid past of one nation and its regime. These compositions had an impact on artists who explore the theme of war and memory. Always somewhere between abstraction and figuration, Kiefer’s poetic and deeply psychological approach discusses hard social issues that are, thanks to him and his contemporaries, such as Georg Baselitz, Sigmar Polke, and Gerhard Richter, brought into the discussion, forcing Germany to face its terrible past. Since his first solo exhibition in 1969, Kiefer’s work has been exhibited in numerous group and solo shows across the globe. It is as also a part of several public collections, including the Hamburger Bahnhof, Berlin, the Museum of Modern Art and Solomon R. Guggenheim Museum in New York, Detroit Institute of Arts, The Tate Modern, London, The Tel Aviv Museum of Art, and the Albertina in Vienna[4], among the others. In 1990, he was the recipient of the Wolf Prize and nine years later, the Japan Art Association awarded him the Praemium Imperiale for his lifetime achievements.