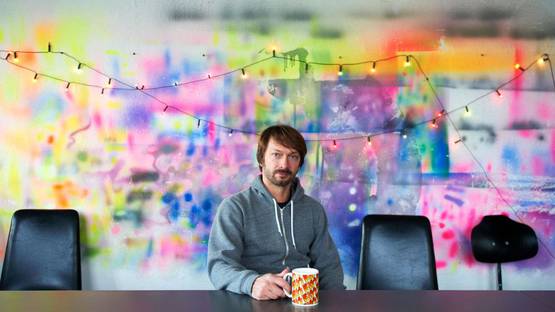 Berlin-based, born in 1970 Anselm Reyle’s work are characterized by various found objects that have been removed from their original function, altered visually and contextually reinvented. His works are inspired by early abstract painter Otto Freundlich and his technique by innovators Jackson Pollock and Barnett Newman. Reyle self-consciously revives aspects such as Hard-Edged stripes and the gestural brushstrokes of Abstract Expressionism.

The artist studied at Staatliche Akademie der Bildenden Künste Stuttgart and Karlsruhe. In 1998, he moved to Berlin and opened a gallery community with other artists, such as John Bock, Berta Fischer, and Michel Majerus. His installations with neon are indeed elaborate pieces of art. His career escalated quickly with solo shows in Berlin, followed by Rome, and finally New York, at which point his path to a rising international art star was certain. The artist worked for several art institutions in Germany, such as Berlin University of the Arts and Hochschule für bildende Künste Hamburg, where he was appointed as a professor of painting and drawing in 2009.

Growing up in an artistic household, with a mother who painted abstracted landscapes, it is no wonder that Anselm himself, took an early interest in landscape design. Music was also his field of interest before he finally found himself in painting and sculpture. Reyle works in different media, utilizing strategies of painting, sculpture, and installation and working in serial, structured work groups. He uses a vast and diverse group of materials taken from traditional art, commercial milieus and useless everyday garbage taken from urban areas. Reyle removes these materials from their contexts and masks their original function, thus varying the degree to which each retains its respective visual reference. Utilizing formulas of appropriation the work lets the viewer shift between moments of identification of individual elements within the work, and periods of alienation due to their new context. Some US critics have taken Reyle’s luxurious work as uber-kitsch, which is straight on point to what Reyle was aiming for. This obviously comes from his early age when his artistic parents wanted to teach him good taste, but he kept rebelling. His monochrome works are considered to be a middle finger to the art world.

Some US critics have taken Reyle's work to be uber-kitsch

The highly celebrated abstract works of Anselm Reyle are his foil paintings. These pieces are created by arranging foil, and installing it in colored Perspex boxes. The foil trapped in the box gives a shimmering glow and invites the viewer to engage in a tactile experience, which the viewer is being denied at the same time. The foil exudes a spatial presence with its dynamic surface. It is also this rigid geometrical surface that contradicts the fragile nature of folded foil. It’s ironic how Reyle is being criticized as kitsch, while his fascination with high gloss effect and decorative material is derived from the merchandising world only to frame his own critique of kitsch. This clash of low-culture in its consumerist form, and what is known to be high art, is the focal point of Reyle’s art, confronting the viewer with the thin line at which these two categories meet.