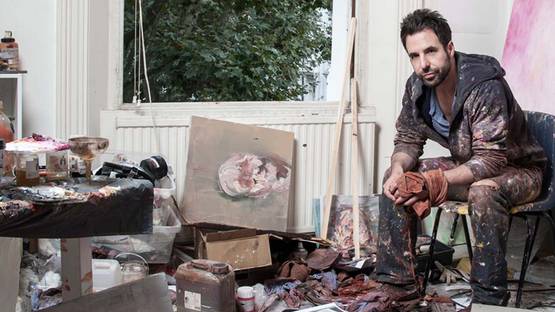 Antony Micallef is a British contemporary artist and painter whose mix of political imagery fused with contemporary expressionism has won him worldwide acclaim.

He was born in Swindon, England and graduated in Fine Arts from the University of Plymouth. Antony Micallef appeared on the art scene in 2000, winning second prize in the BP Portrait Award competition. Collectors of his work include Angelina Jolie and Brad Pitt and a handful of Hollywood’s young, bright and beautiful.

Some of Micallef's work illustrates many contemporary cultural aspects and connects them with the human experience. His use of neutral colors and depictions of the human form delve beyond pop culture and bring to the surface many of the things that operate underneath the cultural construct. Aspects of Micallef's work examines our dichotomous relationship with consumerism, questioning how we can despise multi-national brands yet still allow ourselves to be seduced by them. He frequently uses the union of two opposites to make an intriguing chemistry. Micallef's practice has been summarized as 'critical pop', exposing the darker side of our consumerist society and the human condition.

Described as "Caravaggio meets Manga", this potent cocktail has unsurprisingly seen Antony become one of the most compelling living painters. He describes his work as "like watching a Disney movie which slowly turns into violent pornography," elaborating with, "the trouble with pop imagery is that it doesn't really go deeper than the surface, you have to drag it down and challenge it to make it interesting."

Antony was notably trained by the notoriously austere landscape painter John Virtue who in turn was taught by Frank Auerbach. While his mentor's influence can certainly be seen, especially in early monochrome works such as Kiss at Tower Bridge, in contrast Antony has often passionately embraced color. His paintings are predominantly composed of charcoal and oils, and equally powerful when transferred to the medium of print – figures and faces loom through the veil of loose, confident, almost abstract brushstrokes, and animals and humans merge in the accidents of the artist's stream of dark consciousness.

Antony Micallef has exhibited throughout the world from L.A, Tokyo to Bethlehem. As well as exhibiting at the National Portrait Gallery recent group shows include the Royal Academy, Burlington Gardens and a print show at the Tate Britain.

He lives in Notting Hill, London.