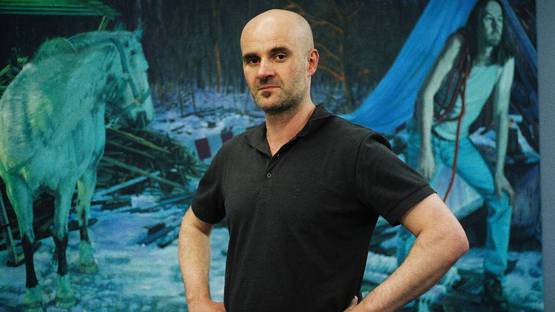 Aris Kalaizis is a Greek-born painter now based in Leipzig. His paintings are often charged by a strange ferocity, in which everything takes place at the same time - magic, grace, harmony, and an unfathomable abyss.

Aris Kalaizis was born in 1966 in Leipzig, where he grew up as the son of a Greek political immigrants. After an apprenticeship in offset printing and later having been trained as a photo technician, he began his studies in painting in 1992 at the Academy of Visual Arts Leipzig, from which he graduated with summa cum laude in 1997. He was a master student of Arno Rink from 1997 to 2000. Influences have come to Aris in the person of his professor, during his studies, but in the most recent years, he increasingly has been inspired by the Baroque painter Jusepe de Ribera and the British artist Francis Bacon.

Kalaizis constructs his paintings, which are often elicited by dreams, with the aid of elaborate staging and by building up large scale scenes at the place of the imagined action. In this process a number of preliminary photographs are taken, from which the final painting is developed. His scenes sometimes appear to be surreal, but he unfolds their subject carefully over a long time. Aris writes down the ideas that will or will not surface in his paintings in form of a screenplay. The result of this uncommonly slow creative process are painted images depicting idealized prospects and possibilities of inner worlds.
At the beginning of his work however there is a dream, which evokes an inner image or inner desire. After this image has in some way been clearly envisioned, he builds a large scale model of this image in his atelier or seeks out this vision in scenes, places, or constellations in the reality of the world outside the atelier. Meditative and contemplative process follows, that aims at scenes that could have taken place before and after the scene to be depicted. This approach distinguishes Kalaizis fundamentally from the photorealists, as they do not challenge the fringes of reality.
This elaborate procedure of course is incredibly time consuming, only resulting in about five paintings per year. It brings forth scenes that are parallel projects of that which exists in reality. It is a deliberate strategy that is contrary to the mass production of many contemporary artists. Because his paintings could hardly be entirely classified under surrealism or realism, the term sottorealism was developed, based on Kalaizis' work. In this context, ‘sotto’ refers to beyond or below and points to the hidden mystery that exists behind the depicted surface of the painting.

His first individual public exhibition took place in 2005. In 2007 he presented his works in New York for the first time. International recognition followed, after his participation at the Biennale di Venezia as well as at the 4th triennial in Guangzhou, China. The internationally oriented triennial, which took place at the Guangdong Museum of Art, offered Kalaizis a very large room, in order to present eight large-sized paintings. The most exceptional exhibition so far however was arranged at the palace grounds in Greiz and was titled The Double View. In Greiz, Kalaizis confronted the historical rooms and premises with modern art. In 2014, a comprehensive museum tour through Germany, Austria and the Netherlands took place. In 2014/15 he painted The Martyrdom of St. Bartholomew or the double Martyrdom. This large-size painting is since February 2015 in the Frankfurt Cathedral.