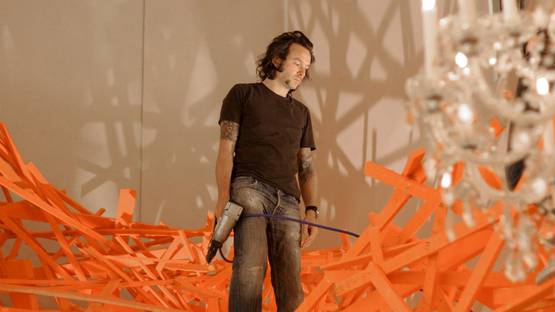 Arne Quinze is a famous Belgian conceptual artist, best known for his project City Like Open-Air Museums consisting of controversial public installations made of wood and metal. Large-scale and massive, his constructions evoke positive reactions from both the public and critics.

Arne Quinze was born in Belgium on December 15, 1971. His career started in the 80s, when he first got involved with graffiti art. Unlike many artists today, Quinze never went through a formal art education. Primarily known for his controversial sculptures and installations, the Belgian also creates paintings and drawings. The latter usually serve as a sort of foundation onto which he “builds” his large-scale installations.

Installations and Artworks by Arne Quinze

Although Arne creates in variety of media, such as glass, metal and paint, he most often opts for different types of wood. The purpose of his installations is to trigger reaction of people passing by them. He wants people to stop for a second, gather and communicate. Quinze’s artwork is mainly referring to social interaction, communication, contradictions, rhythm, evolution and contrasts. The places where he sets his sculptures are also a part of installations. As the wooden constructions are often brightly colored – Arne usually uses intense orange and red colors – they look out of place compared to their surroundings. By doing this, the artist brings into focus the fast-developing, burning issue of the present – the estrangement and isolation people feel nowadays.

Arne Quinze’s take on art is that it greatly influences people – art can bring out the best in us. However, we seem to have forgotten about this. With the project Cities Like Open-Air Museums, Quinze is trying to revive this interest. Provoking interaction and communication is what prompts the Belgian to create his famous installations. The project involves creating large-scale wooden sculptures, and displaying them in major world metropolises.
These artworks give people something to reflect upon, thus striking communication between them. The citizens can also experience their cities anew.

Uchronia is a 2006 public wooden installation by Arne Quinze, his first one. It was held in the Nevada Black Rock desert during the annual Burning Man art and community festival. Each year, thousands of people build Black Rock City, expressing their ideas and thoughts. The festival lasts for seven days, after which all attendees leave without leaving a trace of their presence. Arne’s construction was built using around 150 km of wood – the massive sculpture gave people a feeling of being protected. The way that rays of sun passed through the cracks of Uchronia created beautiful shifting patterns.

Uchronia at the Burning Man Festival

When the festival was over, Uchronia was burned down, because the Nevada dessert needs to be “cleaned” and returned to its previous state. There is also a certain symbolism behind setting this installation on fire – we shouldn’t be scared of new beginnings, of change and transition. The burning of Uchronia provoked Quinze’s desired reaction: communication between people.

The Sequence and The Rebirth

Two years later, in 2008, Arne displayed another installation in wood, this time in the capital of his native country. The Sequence was set on the Louvian Road in Brussels and it connected the Flemish Parliament to the House of Flemish Representatives. The twisting construction looked like it penetrated both buildings, and thus it created the illusion that the two buildings were connected. Again, The Sequence symbolizes the connection between people, a sort of a bridge that brings us all close together, no matter how diverse we are.

That same year, a similar installation titled The Rebirth, was set in Paris, France. However, unlike The Sequence, this one was displayed only for one evening. It was created in honor of redecorating the hotel Royal Monceau. The Rebirth stretched across the entire building, from the lobby to every room.

The Visitor is a 2009 wooden installation located in Beirut, Lebanon. It is actually a Stilt House made in the artist’s recognizable style. Despite standing on four very thin and fragile legs, the structure is stable. This can be taken as a metaphor: people are like Stilt Houses, seemingly unstable and frail. However, they are adaptable and flexible, and can sustain a lot.

The Visitor in Beirut, Lebanon

The environment where this sculpture was placed was very unique – the white walls of the surrounding buildings reflected the light, and the whole area was bright. The intense orange color of The Visitor attracted the people from all over Beirut, which in a way, was the intention of both Quinze, and the patrons. They all wanted the natives of this Middle Eastern city to gather around this “stranger”, and experience their city in a different way.

Another installation by Arne Quinze in France was Camille. It was displayed during a 2010 festival in Rouen, which was organized in honor of the old masters of art. The organizers thought that there was no great difference between the traditional and contemporary art, and that in some ways, they complemented each other. For that reason, another festival, Rouen Impressionnée was established. Camille was placed on the Boieldieu Bridge, a very important construction to the locals, since it is the only way across the Seine.

For the duration of the festival, the bridge was closed for traffic, but was still open for the pedestrians. Again, Quinze’s sculpture brought the people together, and inspired them to communicate with each other. Amazed, the citizens of Rouen started a petition to keep the wooden construction on the bridge, even after the festival was over.

Located in Shanghai, China, Red Beacon is yet another successful attempt of Arne Quinze to unite people, and open their minds. During the 2010 World Expo held in Shanghai, where the improvement of urban life was the main theme, the Jing’An district in Shanghai launched an international sculpture project, the first one that was endorsed by the Chinese government.

The Beacon of Shanghai

My Home My House My Stilt House

Another Arne Quinze’s achievement in 2010 was the public installation called My Home My House My Stilt House. It was displayed at the Louisiana Museum for Modern Art, as a part of Living Frontiers of Architecture. The installation explored the concept of “good life nowadays”, as well as the connection between architecture and art. The installation is the product of Arnes’ curiosity about the organization of our private lives, and how we incorporate it into the ways of society. The artist wonders what private property is, and how protective of it we are.

My Home My House My Stilt House – Exhibition View

The metal installation titled Rock Strangers was conceived as a multinational exhibition of metal sculptures held in cities such as Paris, Shanghai and Antwerp, to name a few. It started in 2011 and is still active. They “mysteriously” appear in various locations, affecting both the architectural and urban context of environment. They are brightly colored, usually a vivid shade of orange, thus symbolizing the isolation and estrangement people feel.
Quinze says that there are many cities in the world that look similar – the only difference being their location. The buildings look identical as well, which makes people feel small. The artist hopes that his Rock Strangers will raise people’s awareness of their existence and ways of life. It is an innate urge that people feel safe, to avoid any unexpected changes, which is the reason why they build walls around them.

Rock Strangers Around the World

The idea behind Rock Strangers is that these odd, out of place objects will open our minds towards new things, that they will help us break our habits. Arne Quinze juxtaposes the vibrancy of his sculptures and the plainness of the environment they are set in. It is that very difference that evokes interaction between people.

In 2014 and 2015, Arne Quinze chose the center of Mons, Belgium (more precisely the Rue Nimy) as the home for his two separate wooden installations of the same name – The Passenger. The choice of Rue Nimy was not an arbitrary one, as the street has been an important trading center throughout the history of this Belgian city. This installation highlights the importance of Rue Nimy, as many culturally diverse people pass through it.

The Passenger in Mons, Belgium

Other Artworks by Arne Quinze

The concept of Stilt Houses is present in many of Quinze’s public installations. Arne compares them with humans, as they only seem like they are shaky and unstable, but are in fact adaptable to any situation, and can survive in any context. The perfect Stilt House is tall, watching over everything. This symbolizes our aspirations and strivings towards going higher and further in life. Arne first created Stilt Houses in 2007.

“There is no Chaos, only Structure” – this is the thought that is behind every artwork by Arne. The artwork Chaos in particular was first intended to be a self-portrait of the artist. However, the more he studied it, the quicker he realized that it represented the society and the “chaos” that rules in it. Countless small sticks are stuck to each other, making chaos. Only they are not – there is a structure behind them. First created in 2009, Chaos symbolizes life. Everything is a matter of rhythm in life.

Highly acclaimed, Arne Quinze’s artworks have been featured in numerous festivals and exhibitions, both one-man and group. This earned him an international renown. He married twice, first in 2009 with Barbara Becker, a German-American designer and model. They separated in 2011, and a year later, Quinze married An Lemmers, a TV and radio personality in Belgium. The artist is represented by the David Bloch Gallery in Marrakech, Morroco.

Arne Quinze lives and creates between Sint-Martens-Latem in Belgium and Shanghai, China.

All images are © Arne Quinze