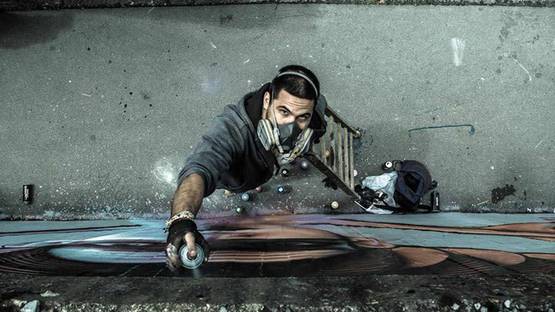 Artez is a Serbian artist whose style is defined as a mixing photorealism with illustration. He draws inspiration for his works, besides location, from the things and persons that are present in his everyday life. He usually has a photo of something that inspires him as a starting point, but during the painting process he improvises a lot, mostly because he likes to get inspiration from the site itself. For years he was trying to find the best way to express himself and transfer ideas from his head to the flat surface – wall. Along the way, he has been working with 2D and 3D letters, different types and styles of characters, photorealism, and in the end he got stuck with the mix of “little bit from everything”.

Artez was born in 1988 in Belgrade, Serbia and he earned his degree at the Faculty of Architecture in Belgrade (2013).

When he was just a kid he saw some tags on the street – later on, when he was only 10 or 11 years old, he tried to write his name in notebook during the class in school. Few months later, he bought a marker and made his first tags, just next to the ones that he saw before and had admired them.

“At first I started tagging ARTE, but the name didn’t sound too good, there was just too many people that were using that same letter combination. After some time, I decided to add Z to the end, probably under the influence of my friend Bantu, a man who introduced me to graffiti and who, at that time, used to write “Skillz”. I don’t really know about the other meanings, but I hope that my work will add a new meaning to the moniker that I use.”

First piece that he painted involved: trespassing into his school yard at the middle of the night and enjoying the adrenalin rush for the first time. He wrote ‘GEN88’ because it was a piece dedicated to the end of his elementary school. Unfortunately, he never had a chance to make a photo of that piece - janitor was quick with repainting it, so it was already gone when he came to school around 7am next day.

“Looking back at those days, and thinking about why I did it, I wouldn’t say that I wanted to leave my name just for sake of self promotion. I think that somewhere deep inside I felt I might inspire someone with my little intervention, like the other people have inspired me. This same feeling is the main reason why I am still painting – I hope that my work will inspire other people, and if that happens I know that I didn’t paint for nothing!"

Artez has found inspiration in the work of many different artists over the years because his interest in different styles and techniques kept changing constantly. According to the artist, perhaps the most visible influence that is still present in his work is the one that he has got from ‘Maclaim’ crew and their photorealistic graffiti that he admired so much.

His 5 months long stay in India definitely left a mark on his color palette and the color combinations that he uses. Also, Indian culture changed his perception of the things around him: “I’ve learned to appreciate some things that I didn’t find important before. I guess that in a way it also influenced the themes that could be seen in my work; probably the best example would be the “Find your way to fly” mural series that I am working on.”

At the moment, Artez is working on preparation of his solo show, which is scheduled for March 2015. When it comes to long term future plans, his plan is to continue learning and to keep pushing his personal boundaries.