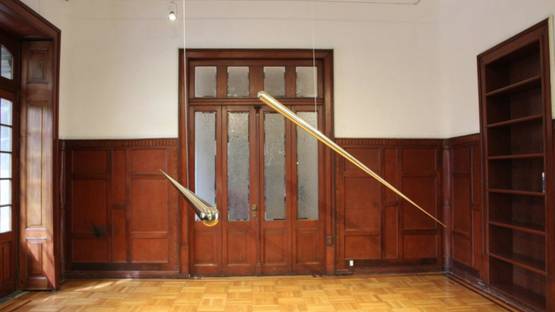 A Brazilian visual artist, Artur Lescher has been making austere, poetic sculptures, objects, and installations since the 1980s, exploring the mechanics of form and movement, balance and tension, and architectural spaces. Transcending their sculptural character, his pieces crossbreed the boundaries of installations and objects to modify the understanding of these categories.

Reflecting direct influences from Constructivism, Suprematism, the Brazilian Neo-Concrete movement, Performance Art and Minimalism, Lescher has been playing with the perception of materials and spaces. His works juxtapose solid geometrical structures and materials with changeable elements such as water, olive oil, and salt. Focusing on perceived boundaries and continuously breaking them down, he created artworks that transform the space creating new planes and engaging the viewer into different perspective.