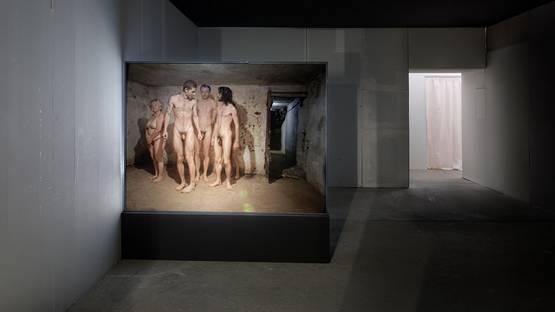 The matter of body representation in the work of Artur Zmijewski has perhaps the central role. How the human physicality is being controlled, used, monitored, and shaped by the socio-political mechanisms triggers Zmijewski the most. Regardless of the media, the artist is on a constant quest to unmasking and deconstructing various states of the body by subtly undermining it’s fragility and vulnerability in accordance with the social norms. The narratives which the artist shapes are related with the bio-political discourse and various theoretical approaches that are dealing with the body. Therefore, it can be said that his art practice is bold, radical and progressive, despite the general notion of what political or engaged art, in general, should be.

Artur Zmijewski is born in 1966, in Warsaw. From 1990-1995 he attended Academy of Fine Arts in Warsaw at the sculpture department guided by the famous Polish avant-garde artist Prof. Grzegorz Kowalski. Four years later, Zmijewski started studying at Gerrit Rietveld Academie in Amsterdam. His career was already rather developed, but after he received the first prize at the exhibition Guarene Arte in Italy for his video work An Eye for an Eye, the artist started gaining international fame for his work. The exhibition activity was largely increased as well as reputation which then led to Artur Zmijewski representing national pavilion at the Venice Bienalle in 2005.

Undermining the material bodies subjection to illness and decay

During and shortly after his studies, Artur Zmijewski was focused on the production of objects. Those were specific mechanisms almost like robot devices whose operation depicted physical or psychical functions of man, like fear, the stench of decaying flesh or circulation of liquids in the organism. In one point the artist started to work with video since, as he once claimed, was fascinated with the possibility to treat the body the way a sculptor would treat clay. Additional media which he found useful and was a prelude to motion pictures was photography. Anyhow, that transition came naturally since Zmijewski just sought to find other means to represent his idea. Actually, from analyzing collective or individual bodies in relation to certain obstacles, Zmijewski was constantly trying to focus on the matters of otherness, inclusion, marginalization, illness, imperfection and captivity in order to speak about the politics.[1]

The physical defect as a metaphor for spiritual or mental cripplehood

On the Venice Biennial in 2005, Zmijewski presented himself with the project titled Powtorzenie (Repetition). It was a reenactment documentary focused on the historical Stanford Prison Experiment from 1971. The maker of that experiment was Doctor Philip Zimbardo who was known for his highly debatable psychology of evil. That meant analyzing the behavior of ordinary people placed in the roles of prisoners and wardens in a make-shift prison in order to prove that human behavior is predictable and dependent on circumstances. In Zmijweski’s edition, the experiment took an extremely different turn - the participants collectively decided to leave the prison, revolting against the author of the project.

The film of Artur Zmijewski was surrounded with controversy

Constant Activity and Social Engagement in the work of Artur Zmijewski