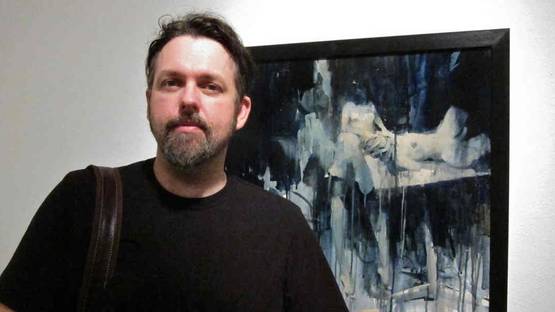 Although the activity of Ashley Wood rotates around comic books, cover art, concept design and art direction, his approach can be undermined as a painterly one. The extensiveness of his work is based on breaking the conventions of the media in regards to a constant shift. Such an agenda provides freshness and a progression of the whole creative process. Despite the fact that Wood’s work is often commissioned and in the certain way affected by the client’s wishes, he manages to stay focused on comics where his imagination is most conspicuous.

Ashley Wood is born in 1971, in Australia. Over the years he has become prolific comic book artist and award-winning illustrator. Wood was involved in both the UK and international comic book industries and rapid success brought him to working on US market with top publishers Marvel and DC Comics. The most famous comic character that he has produced while in the UK is Judge Dredd. Wood became specialized in graphic novels and started working for Image company and later for Todd McFarlane Toys. Besides painting and digital art making, gradually he started working with movie and TV projects.

In 1998, Wood became an associate of Hideo Kojima on the project of first digital comics for the platform Sony Playstation. The reception of the comic Metal Gear Solid was outstanding, a complete commercial success, shipping over six million copies worldwide. That engagement brought him to realizing additional artworks for the PlayStation Portable game in 2006 and the comic book sequel titled Metal Gear Solid 2: Sons of Liberty. Together with his colleague TP Louise in 2004 Wood opens 7174 PTY LTD an Australian-based entertainment company specialized in the creation of entertainment features for the comic, film, toys, and video game industry.

Spreading the word through comic imagery

World of 3A, Graphic Novels and Toys

The comic that established Wood as a burgeoning comic book artist was Popbot realized in 2000. He even received several awards for that one and in 2004 IDW company in association with Sideshow Toys produced the limited edition of Popbot polystone statues according to the cast of characters starring a talking rock star cat, his robot bodyguard, sexy women, robot ninja assassins, etc. Wood is also the creator of the World War Robot series of graphic novels, graphic novel Lore. In 2008 Ashley Wood and Hong Kong toy maker Kim Fung Wong founded new company under the name ThreeA on the basis of using an international network of development partners coupled with the vast experience of previous 7174. It soon became influential and award winning toy, entertainment, and publishing company, especially in the international terms because of their progressive approach in regards to technology and therefore quality.

The Established Career of Ashley Wood

Over the years Wood kept his dedication to the principles of his illustration technique which is a combination of traditional painting techniques, coupled with digital photography and graphic software. Nevertheless, some of his comics are about to be filmed like Popbot which is currently in film production with Resolution Independent and World War Robot is currently in pre-production with Disney Studios. The focus on details, the precision of constructing authentic characters made Wood a prominent figure who’s was not compromised by commercial success, yet he maintained and upgraded his personal style.