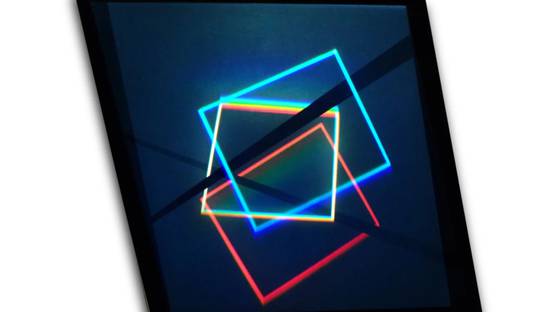 An American contemporary artist, August Muth is pioneer in the exploration of light through holography for over 30 years.

Born In 1955 In Albuquerque, New Mexico, Muth lives and works in Santa Fe, New Mexico. His interest in light began at the age of 16 when he began making large water-filled glass prisms. He studied art and physics at the University of New Mexico, and later continued at the University of Houston, and the University of Texas at Austin. In 1978, he moved to New York to pursue his artistic career. In 1985, he relocated to the Telluride, Colorado area and spent the next 7 years building his first holographic studio. After it needed an expansion, he reimagined and constructed it in Santa Fe, New Mexico. He has has exhibited widely, both nationally and internationally, including New York City, London, Milan and St. Petersburg. Muth both exhibited and is part of the collection at the MIT Museum, in Cambridge, MA. Additionally, he has work in the collections of the Museum of Holography in New York, NY

Muth uses holography to integrate art, science and philosophical inquiry into the nature of light, perception, and understanding of reality. Combining elements of sculpture, photography, and laser technology, these works evoke wonder and perceptual bewilderment, inviting the viewers to engage with them. This light-space allows for the raw content and texture of light to be contemplated.